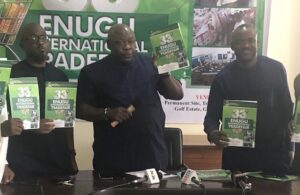 The Enugu Chamber of Commerce, Industries, Mines and Agriculture (ECCIMA) says it will, henceforth, insure exhibitors and their wares at its annual international trade fair.

The First Deputy Vice President of ECCIMA, Mr Jasper Nduagwuike disclosed this on Wednesday in Enugu during the launch of the 33rd Enugu International Trade Fair Catalogue and Magazine.

Nduagwuike said that such insurance policy would cover bodily injuries and loss or damage on goods displayed within the trade fair complex.

He said that the move was aimed at assisting exhibitors who had such bodily injuries and or incurred such damages or loss of goods to mitigate the impact of such occurrence.

He said that the 33rd Enugu International Trade Fair, which would hold from March 25 to April 4, 2022 would witness several innovations and activities that would boost the confidence of participants.

The first deputy vice president said that no fewer than 250 exhibitors, including foreign participants, would be expected during  the fair.

“We are doing a number of things to ensure that the trade fair is better organised and more participants attend. The exercise will be fully insured to protect exhibitors and their wares,” he said.

Nduagwuike said that a number of foreign participants who were interested in the economic climate in the South-East were expected to attend the fair.

“We decided to start preparations for the 33rd Enugu International Trade Fair on good time in order to create the needed awareness. 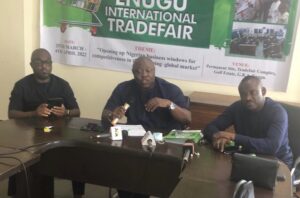 “We are hopeful that the exercise will have more indoor activities in order to make it more convenient for participants and exhibitors to interact,” he said.

Nduagwuike said that it was sad that no meaningful development had been done at the complex by the Federal Government.

He said that four different delegations from the Federal Ministry of Industry had recently visited the complex to access the level of development in order to know areas of intervention.

He, therefore, called on the Federal Government to expedite actions in the development of the trade fair complex just as it did in Kaduna and Lagos.

He said that the organisation of the trade fair needed to be viewed in its national context as an exercise that would display the economic potentials of the country.

“ECCIMA is just the host of the trade fair displaying Nigeria to the world. Therefore, we need to carry out the exercise in a conducive environment,’ Nduagwuike said.

Ikengaonline reports that the theme of the 33rd Enugu International Trade Fair is, “Opening up Nigerian Business Windows for Competitiveness in the Emerging Global Market”.