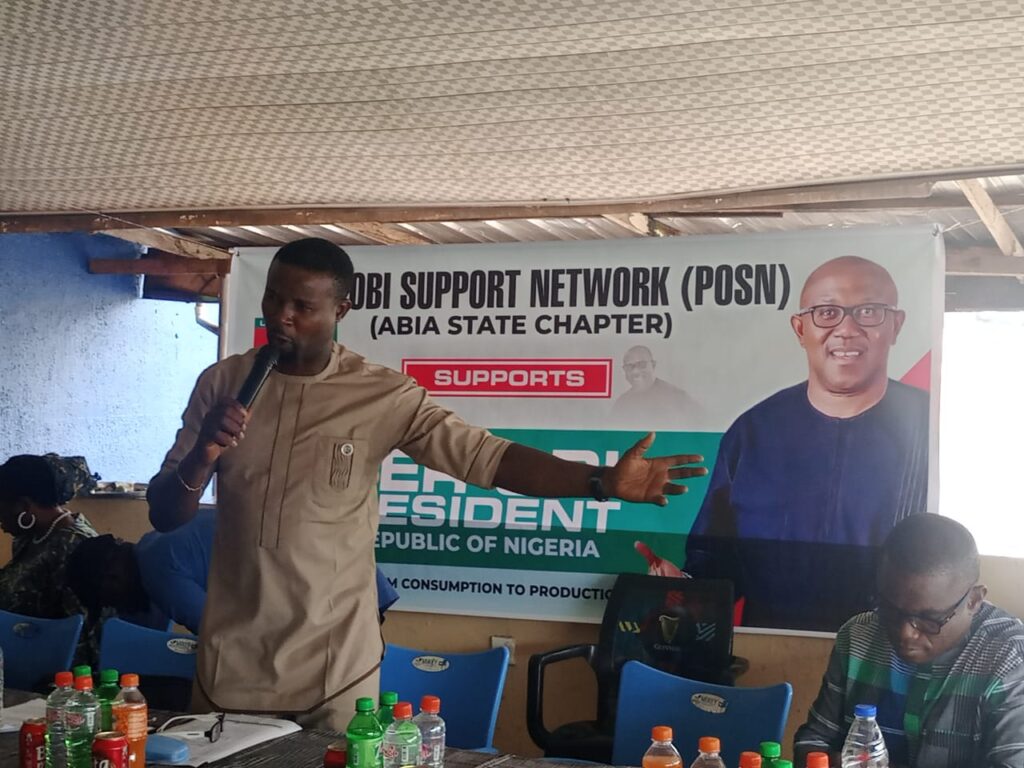 Peter Obi Support Network (POSN), one of the support groups of the presidential candidate of the Labour Party, Mr Peter Obi, has vowed to mobilise 40 million votes for him from across the country in the 2023 presidential poll.

Abia State Coordinator of the group, Comrade Prince Solomon who made the vow Friday in Umuahia while inaugurating the Abia State chapter of POSN, said that Nigerian youths were determined to take back their country from those he described as political hijackers.

“By 2023 Nigerian youths will retire all the political principalities that have ruined their future,” he vowed.

He said that while the winner of the 2019 presidential poll, President Muhammadu Buhari scored 15,191,847 votes; and his first runners up, Atiku Abubakar, 11,262,978 votes respectively, “Nigerian youths would mobilise over 40 million votes for Peter Obi in 2023.”

Solomon explained that the reason Nigerian youths are drumming support for Obi “is because in him they see hope and the rising of a new Nigeria.”

According to him, “POSN was borne out of the quest for a better Nigeria by well meaning Nigerians to select from among the presidential candidates someone who has a track record of integrity and capability to pull our country back from total collapse.”

“We need someone who can run a prudent government; provide responsible leadership; someone with moral/political courage to change the narrative.

“We are tired of the old order; we need a real change that will restore hope and confidence of Nigerians in their country irrespective of tribe and religion.”

He said that Peter Obi movement “is the major political movement today in Nigeria that is giving others sleepless nights.”

“They said we are minority but I can tell you that we have suddenly become the majority. Obi movement is like a wildfire gulping everything on its way. Even the bravest among the others are now jittery.”

According to him, despite pretensions by the two major political parties, the Obi movement is really their nightmare and some of them are beginning to admit the obvious truth.

He disclosed that the group had also been set up in different major markets in the state.

Adding his voice, State Organising Secretary of the group, Hon. Justice Obi, said that Nigerian youths had awaken from their slumber, and would ensure they dislodge the “political locusts in 2023.”

He urged intending members of the group to get their Permanent Voter’s Card, PVC, before the deadline for registration, stressing that possession of PVC is one of the criteria for membership of the group.

Dr Obi said that contrary to thinking in some quarters, funding would never be a challenge to the movement as people are ready to sell their lands and donate “to ensure we rescue our country from the hijackers.”

A number of speakers at the event said they were not politicians and had never shown interest in politics but had decided “to be actively involved now because of Peter Obi.”

The gathering was well attended by youths from across the state.