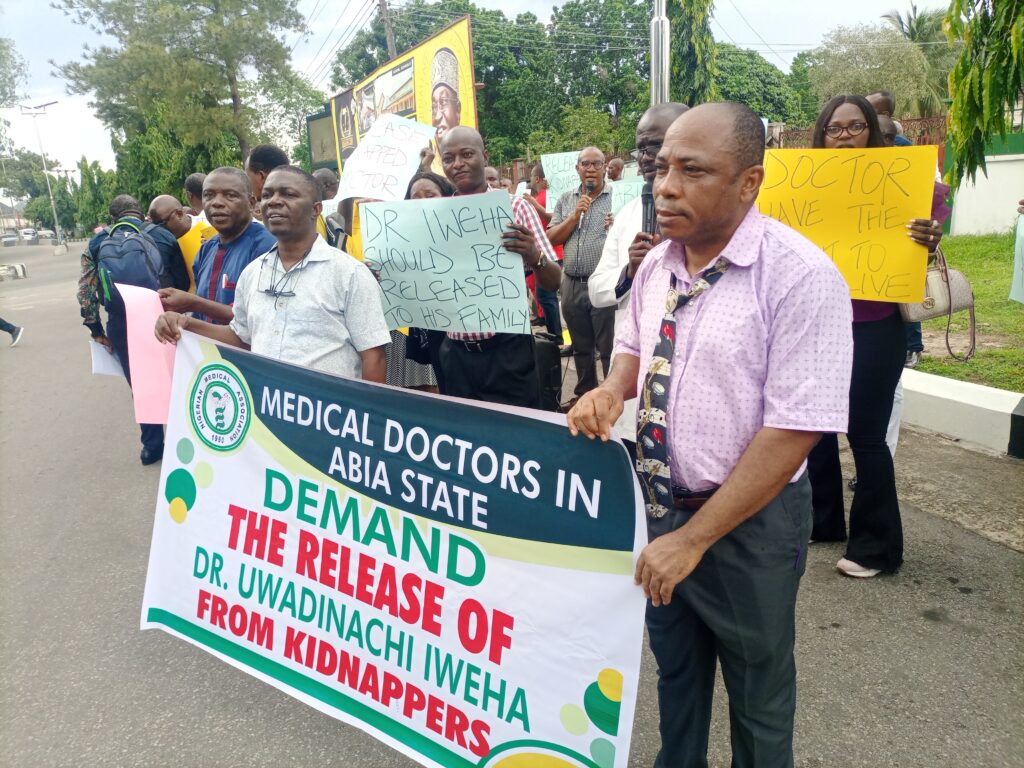 Doctors in Abia State, Friday, stagged a protest in Umuahia over the kidnap and continued detention of their colleague, Professor Uwadinachi Iweha, who was abducted in front of his house on Sunday the previous week.

The irate doctors who trooped out in their numbers, marched from the Federal Medical Centre Umuahia to the main entrance gate to the Government House where they blocked the gate to register their grievances.

Decrying the incessant cases of Kidnapping in the state, the doctors demanded the immediate release of their Kidnapped colleague.

Professor Iweha was abducted by unknown gunmen who whisked him away in his dark-blue Highlander Jeep while driving out of his house at Umuokpara in Umuahia South Local Government Area.

The protesting doctors carried placards with various inscriptions such as: “Doctors lives matter,” “Dr Iweha should be released to his family,” “Doctors have the right to live,” among others.

Speaking on behalf of the doctors during the peaceful protest, Chairman of the Nigeria Medical Association, NMA, Abia State chapter, Dr. Chimezie Okwuonu, said that the abduction of the medical doctor had thrown the medical community in a state of confusion and apprehension.

He expressed concern that since the sad incident on Sunday, every effort made towards securing his release from the captors had not yielded any fruit.

The doctors sought Government’s urgent intervention to rescue their kidnapped colleague, while decrying the rate of abductions in the country.

The NMA Chairman, threatened that if after 48 hours their kidnapped member was not released, doctors across the state might have no other option than to down tools as their safety could no longer be guaranteed in the state.

Dr Iweha was kidnapped exactly two weeks after the Prelate of Methodist Church of Nigeria, His Eminence Samuel Uche and two other clerics traveling with him were abducted by unknown gunmen suspected to be herders around Lokpa axis of Enugu Port Harcourt Expressway way.

The Prelate who was released two days later after a ransom of N100 million was paid, alleged that his captors were Fulani herdsmen.

Meanwhile, the NMA Chairman later read a communiqué issued at the end of an Emergency General Meeting of the medical body held at the Federal Medical Centre Umuahia before the protest.

According to the communiqué jointly signed by the Chairman, Dr. Okwuonu, and the Secretary, Dr Robinson Ugwuanyi, NMA said it had worked tirelessly but without success to secure release of Prof. Iweha.

It read in part: “That up till today 10th June 2022, Prof Iweha has not been released from the kidnappers’ den.

“That this is traumatic, depressing, dehumanising and has instilled a lot of fear within the medical community whose primary objective is to save the life of Abians from the medical point of view. “With the current state of fear caused by the kidnap and detention of our colleague, safety cannot be guaranteed to the Medical Doctors in Abia State, and it will be difficult to attend to our normal duties since no one knows who will be the next victim.

“We demand immediate release of Prof Uwadinachi Iweha from captivity of the kidnappers.

“The Federal and State Government should put in measures to forestall occurrence of similar event in the future.

“If Prof Iweha is not released in 48 hours, members of the Nigerian Medical Association may be forced to down tools as our security in performance of our usual duties is not guaranteed.

“This communiqué serves as a notice for the aforementioned action.”

The union, however, called for intensified prayers for the release of its abducted member.

Responding, Gov. Okezie Ikpeazu assured the doctors that efforts were being intensified to secure the release of their kidnapped colleague.

Ikpeazu who was represented by his Chief of Staff, Chief Okey Ahaiwe, said that Government would stop at nothing in ensuring total security of lives and property across the state.

He appealed to the doctors to remain calm while efforts were being made to rescue the abducted doctor.