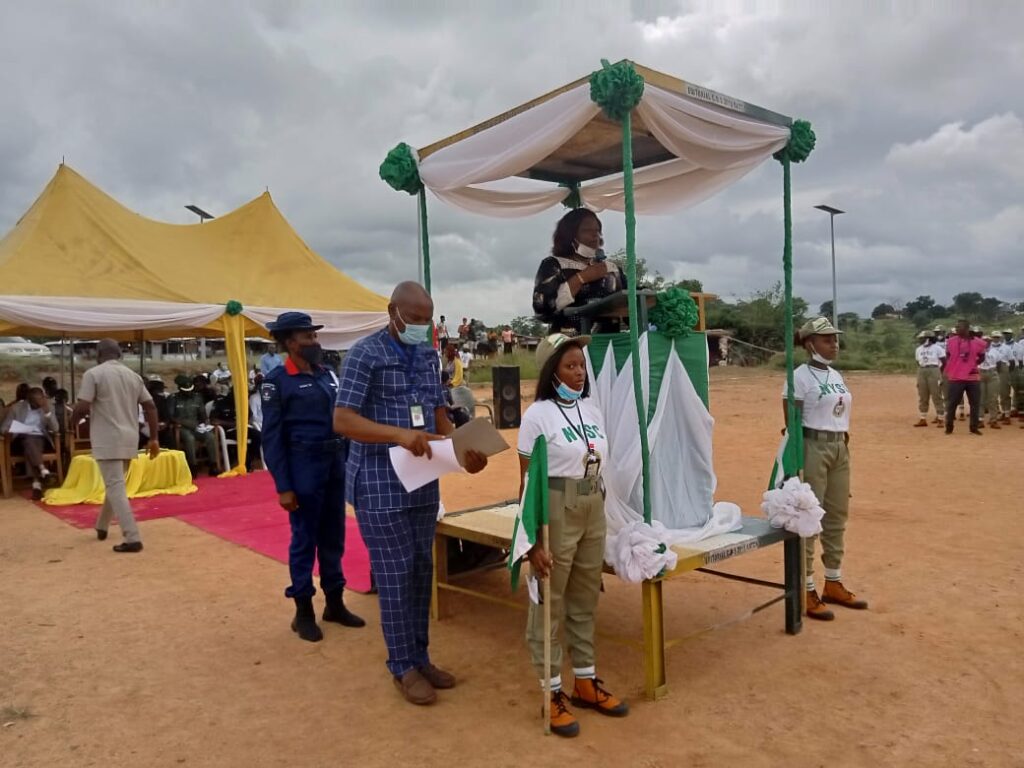 The 2022 Batch B stream 1 Orientation Course of the National Youth Service Corps (NYSC), commenced in Ebonyi State with the swearing in of 1337 corps members on Tuesday.

A breakdown of the 1337 corps members shows that 233 of the new members were male while 1104 were female.

The new Corps members were sworn into the Service by the State Chief Judge, Elvis Ngele represented by Justice Vincent Nwancho.

Addressing the Corps Members, the Director-General of the NYSC, Mohammed Fadah urged the Corps members to strive to uphold the unity of the country at all times especially during the service year.

While urging the Corps members to avoid cultism and other social vices the DG also charged them to avoid using social media to stoke the embers of division but to use same to promote unity of the country.

“As you may be aware, one of the objectives of NYSC is the promotion of national unity and integration.  Hence, your deployment away from your States of origin and your assemblage here from diverse ethnic, religious and socio-economic backgrounds.

“This policy will not only offer you the opportunity for a broader understanding of the country, but also entrench the culture of working together in an atmosphere filled with friendship, peace, harmony, and a shared vision of a great and prosperous Nigeria.

“Let me also remind you that the oath of allegiance you have taken today is significant, as it is expected to guide your conduct in the service year as well as have an everlasting influence on your life after service. You are also enjoined to familiarize yourselves with the provisions of the NYSC Act and the NYSC By-Laws.

“I implore you to sustain the high level of discipline and enthusiasm you have demonstrated so far, especially by remaining compliant with the Camp rules and regulations.

“You must continue to distance yourselves from cultism, drug abuse and other social vices.  I also urge you to avoid using social media for spreading fake news, fuelling hatred and other negative purposes, and instead deploy the same for the promotion of national unity and development”, he said.

Mr Fadah represented by the state Coordinator, Bamai Mercy, also advised the corps members to be security conscious at all times and to report any suspicious characters or activities around them to the appropriate authorities.

He also called on them to take the skills acquisition and entrepreneurship development program in the camp seriously as there are very few white-collar jobs available.

“You are expected to choose from any of the skill areas, and make yourselves available for the training, which starts from the Orientation Camp. On our part, Management will continue to work with relevant stakeholders for the success of the programme,” he said.

The NYSC DG said the Orientation Course is the first cardinal programme of NYSC, which is aimed at introducing the corps members to the objectives and programmes of the Scheme.

“It is designed to equip you for the tasks of the Service Year through lessons on skills acquisition and entrepreneurship development, leadership coaching, paramilitary drills and other physical training as well as sensitization on topical national issues, amongst others.

“It is also a platform for kick-starting various activities that will enable you to realize your potentials and attain individual feats both during and after service. I, therefore, enjoin you to utilize this once-in-a-lifetime opportunity by participating in all the Camp activities”, he said.