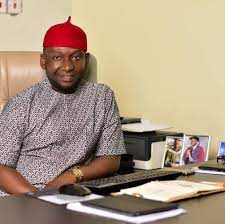 Justice Alexious Okuma of Atani High Court has directed the Anambra State Commissioner for Commerce and Industry, Dr. Christian Ngonadi, and other officials of the Ministry to stop harassing the Chairman of Ogbaru Main Market, Chief Ndubuisi  Ochiogu, and the  members of his executive committee with security operatives.

Justice Okuma issued the order  over the weekend when the case brought by the Ochiogu-led executive against the Commissioner for Commerce  and Attorney-General of the State came up for hearing  at Onitsha High Court.

The directive came following complaints by the counsel to the leadership of  Ogbaru Main market, Chief  Ben Uzuegbu (SAN ) that the order of the Court that the status quo ante bellum should be maintained was not obeyed by  the Commissioner and his officials.

He stated  that officials of the Ministry  have  been harassing his clients with invitation to the Police and Directorate of State Services (DSS).

The Principal State Counsel, Loveline Ezude, who appeared for the Commissioner and others, however, accused Ochiogu and his executives of using thugs to harass and intimidate traders in the market.

Justice Okuma in his directive said  there was no need for the involvement of the security operatives by the Government officials in a matter being handled by the court, noting  that Government as the father of all should always toe the line of civility in the discharge of their duties.

He warned that no trader in the Market should be harassed, touched or stopped from carrying out his/her  legitimate business.

Justice Okuma issued stern warning to the leadership of the market against imposing any levy on the traders to pay the Judge,  saying he would not hesitate to descend  heavily on anybody found  involved in such act.