The year 2018 was one of self-examination for Nigeria. President Muhammadu Buhari who flew in on the wings of change had been in power for three years and the situation had simply become far worse. The inflation rate when he came in was 9.01 per cent, shooting up to 15.68 per cent the following year, and 16.52 in 2017.

Virtually all the over 165 integrated special schools for the Almajiri out-of-school children established by his predecessor had been closed. The government had deliberately exacerbated the ethno-religious challenges in the country by appointing almost all the security chiefs from one part of the country and from a particular religion, thereby violating the Constitution and sharpening divides in the country.

Buhari had in September 2015 vowed to end the Boko Haram terrorist insurgency within three months. However, three years on, he was virtually the only human who believed the thriving Boko Haram had been ‘technically defeated’ as far back as December 2015. As the terrorists, now joined by bandits, continued their merciless attacks on the populace, the Buhari government advised citizens in the Benue Basin to surrender their ancestral homes to the terrorists rather than risk being killed.

With the country in retreat on many fronts, the populace under siege and Buhari threatening to contest for a second term, Bishop Matthew Hassan Kukah who had become part of the conscience of the country, on June 22, 2018, delivered the University of Jos Convocation Lecture. It was titled: ‘Broken Truths: Nigeria’s Elusive Quest for National Cohesion.’ 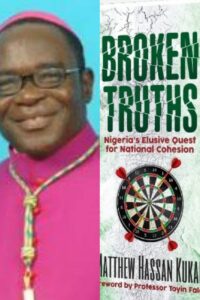 In it, while searching for the truth, he encountered three: the truth by the teller, the truth by the opposing side, and “the” truth itself. In analysing the Nigerian situation, Kukah regretted that: “We are surrounded by walls of lies, half-truths, and innuendos, which have become woven into the tapestry of our national history.” He regretted that since independence, Nigerians have had to live with “horrible leadership” and “we have excused the rogues” on the grounds that they are our fellow tribesmen or religionists and that those who raise their voices against such rogues are enemies of our religion or tribe.

Kukah said the British colonialists built Nigeria on three faulty foundations. First, establishing a regional system of government skewed in favour of the North with three quarters of the country’s landmass allocated to the region. Secondly, that the British deliberately suppressed the voices of the minority nationalities even in the face of their own investigations such as the 1958 Willinks Commission. Thirdly, that the British accepted independence for the country only on terms agreeable to the North.

He argued that in the cumulative 29-year military misrule, the coup plotters “went, telling tales to a naïve nation and citizens too dazed to see through the deceit.”

Since the 1999 return to civilian rule, Kukah pointed out that the democratic process has withstood three major threats. The first was the 2000 attempt “when a few disgruntled Northern politicians took their hypocrisy to a very high level by declaring that they wanted the Northern states to sign to Islamic law.” The second was the period of uncertainty when it was not clear whether President Umaru Yar’Adua was alive or not which presented an opportunity for a coup. The third was following the 2015 general elections when many powerful forces did not want President Goodluck Jonathan to concede defeat.

Kukah regretted that recruitment and promotion in almost all spectrum of the public service from the local governments through the state to the Federal Government “depend on whom you know not what you know.”

To him, the road towards national cohesion should include an understanding of democracy between the governors and the governed, a deliberate leadership recruitment and open political system which would throw up the best and not one in which “only those in power know whom they will rig into power to cover up their soiled footsteps.”

He also suggested that the universities be returned to their preeminent position of being citadels of learning and culture, while corruption should be tackled rather than deodorised.

In having an eye to the future, the Bishop advised that: “The younger generation must learn from our horrible mistakes –the hypocrisy, the deceit, and outright criminality –which were passed from governance.”

As he looked around and gazed into the future, the Bishop lamented that the country was on a moral free fall as no institution, including the security agencies or administrative instruments, including the Constitution, seems to command overarching loyalty. To him, institutions which in other climes command loyalty, have in Nigeria, been reduced to empty shells. With the retreat of national cohesion, he said, every community is now a nation with its own anthem and flag. He regretted the terrorisation and neglect of history saying: “Without history, a nation navigates without a compass and, memory becomes subjective.”

Kukah asked a pertinent question: “So what shall we say tomorrow when President Buhari is gone? The delusion of our messianic search is part of our frustration.”

All these did not stop Buhari winning the 2019 presidential election, continuing his unhelpful policies, and the country continuing its slide into anarchism. It has not also stopped Kukah marching as to war with truth as weapon. This expectedly has irked the Buhari Presidency which at least annually, attacks the Bishop. When in April 2021, the Presidency claimed the Bishop does “not speak like a man of God,” I replied in my column titled: ‘The Voice Of Bishop Kukah Crying In The Wilderness’ that: “Breaking the mirror Kukah has placed before the Presidency does not matter. Even if the Presidency breaks all the mirrors in the country or declares owning a mirror treasonable felony, that would not change the true image of the Buhari government.”

This year, the Presidency accused the Bishop of being “un-Christian” in his utterances and gave him two options: either “to leave government to the voters and the politicians they elect…or else, he should put away his clerical garb, join partisan politics and see how far he can go.” To this, I responded in my column titled: “Jesus Lost Elections, So Can Bishop Kukah Lose to Buhari.”

This Wednesday, August 31, Bishop Kukah will turn 70. He is coming to Abuja from his Sokoto base bearing his latest book, Broken Truths: Nigeria’s Elusive Quest for National Cohesion, through the PCJ Press and to present his vision of building a think-tank, Kukah Centre. Lovers of truth wish Bishop Kukah many more years of service to humanity.