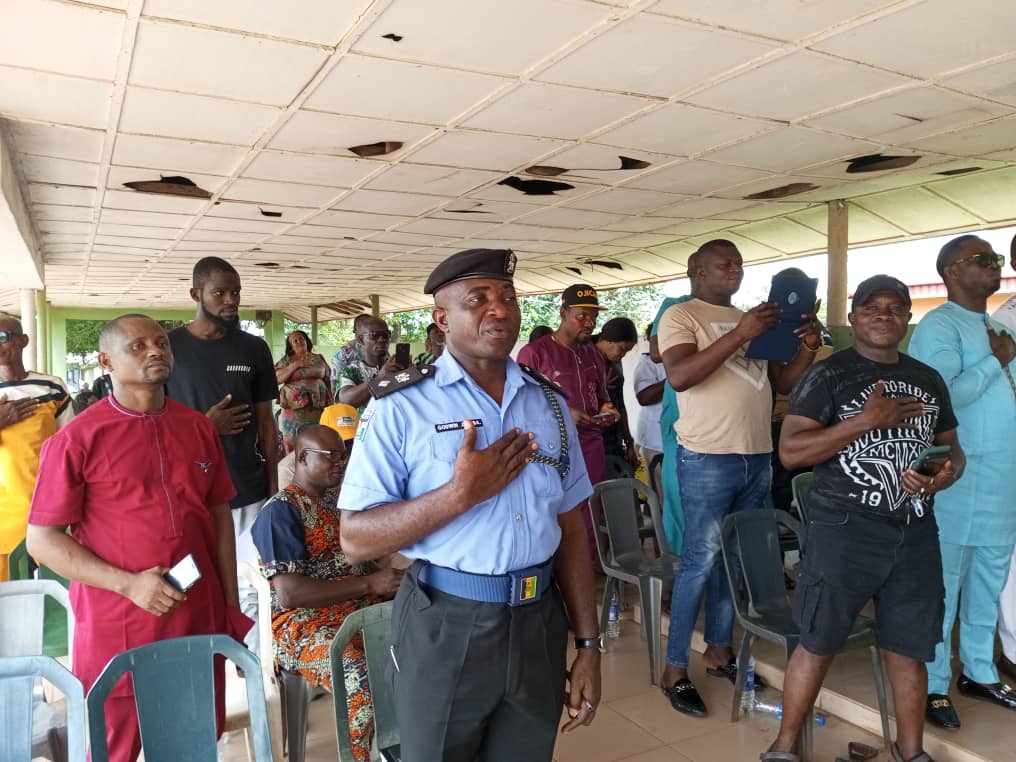 Members of waste management committees taking the oath of service

A Waste Management Action Plan for Anambra State is to be launched in December this year.

The Chairman of the Governing Board of Anambra State Waste Management Authority, ASWAMA, Dr Emma Ezenwaji, disclosed this during the inauguration of the waste management committees for four local government areas under Anambra North Senatorial Zone, in Nteje, Oyi Local Government Area of the state.

According to him, the launch of the eight-year action plan, which will be implemented in three stages, will be performed by Governor Chukwuma Soludo and will run between 2023 to 2030, which equally marks the end of sustainable development goals, SDGs.

“We will get Mr Governor to launch the 8-year action plan, which will be terminated in 2030 which is the deadline for achieving SDGs. It will be implemented in three stages. The first stage is the emergency period. Anywhere you see waste, we remove. Anywhere we see gutter filled up, we open it. Second is the recovery period. We expect that by that time, people would have known what they are supposed to do. Then the last stage is for consolidation, which will terminate in 2030.”

“September 30, 2022, the law comes into force. People must sort their waste into degradables and non-degradables. We cannot continue to throw wealth about as we have done hitherto. Contractors must work towards house to house collection of refuse for smooth implementation of the outlaw. We will activate environmental courts.”

The ASWAMA Board Chairman, who appealed to residents to support the vision of a clean, green, livable and prosperous Anambra State, also stressed the need for them to take the monthly sanitation exercise seriously as part of the strategies for achieving an environmentally hygienic society.

In their separate remarks, a member of the board, Chief Emeka Aghasili, and the permanent secretary, Governor’s Office, Mrs Ifeoma Ezeaku, urged the newly-inaugurated committee members to educate the people in their communities to key into the vision of the Governor.

Chief Aghasili said: “It’s no longer business as usual. Educate them to prepare to pay their sanitation levies,” while Mrs Ezeaku appealed to the committee members to keep everyone duly informed as ignorance would not be an alibi for defaulters, whenever they are arrested by the enforcement agencies.

“This is a great initiative. Already, it is working and we promise that we shall give it all that is necessary to succeed. Environmental health issue is gradually becoming a source of competition among the TC chairmen. However, I like to report to you that the contractor for Oyi is doing his best, but he does not have the capacity.”

The Divisional Police Officer in charge of Otuocha, Mr Godwin Mba, who spoke on behalf of security agencies and the President-General of Ifite-Ogwari, in Ayamelum Local Government Area, Mr Oliver Okonkwo, pledged their readiness to render any form of assistance towards successful implementation of the vision.

The inauguration in Nteje of the waste management committees for Ayamelum, Oyi, Anambra East and West local government areas marked the end of the exercise at the local government level, while the Transition Committee chairmen are strongly advised to inaugurate the ward waste management committees to further take implementation down to the grassroots.