By EditorAugust 3, 2022No Comments1 Min Read 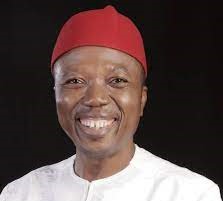 He was elected unopposed at the party headquarters along Abakaiki Enugu Highway.

Nkwegu in his brief speech, thanked the delegates of the party for the confidence reposed in him.

He boasted that Labour Party will win the state in 2023.

Meanwhile, a former House of Reps member and Chieftain of the Peoples Democratic Party (PDP), Chief Linus Okorie;  a governorship aspirant of the PDP, Chief Eze Emmanuel; a Chieftain of the party, Anselem Enigwe; former Commissioner for Education in the state, Prince Chibueze Agbo; have defected to the Labour Party.

While Okorie is Ebonyi South senatorial candidate of the party, Enigwe, Eze and Agbo are Senatorial and House of Representatives candidates of LP for the general election.

They candidates witnessed the election of Nkwegu as the governorship candidate of the Labour Party.