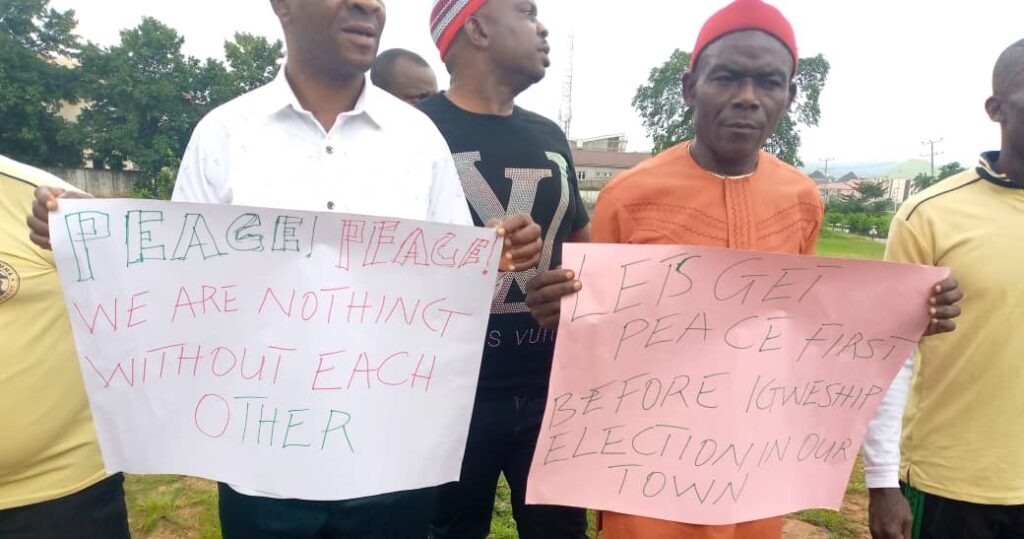 The protesters carried placards with different inscriptions, including: “we want peace in Nkerehi/Umuchukwu community, Soludo please come to our aide,” “we the youths of Nkerehi/Umuchukwu do not  need Igwe for now, let’s get peace first before igweship election in our town,” among others.

Members of the group who are also indigenes of the community were at the government house in Awka on a protest march.

Leader of the protesting group, Mr Christian Arinze, who addressed journalists said the community has been troubled since 2017 as a result of tussle over the traditional stool.

“He has boasted everywhere that he cannot be stopped, so we thought the best thing to do was to come to our governor and complain to him that the man who is being positioned is not the popular choice of the community.

“What is uppermost in the minds of our people is how to  heal wounds caused by disunity, and to bring peace to the community, not crowning an unpopular monarch.

“We are begging Governor Soludo to come to our aid. We need peace in our community, and we know that a peace committee can be set up to achieve this.

“Let him not listen to people who are hell bent on seizing our community from us and positioning their brothers all over.”

A government official who begged not to be quoted as he was not authorized to speak, received the protesters, and also also advised them to write formally to the governor, stating their grouses.

Nkerehi/Umuchukwu community has for years experienced crises, including the change of the community’s name from Nkerehi to Umuchukwu, leading a part of the community to insist on retaining the previous name.