By EditorAugust 1, 2022No Comments4 Mins Read 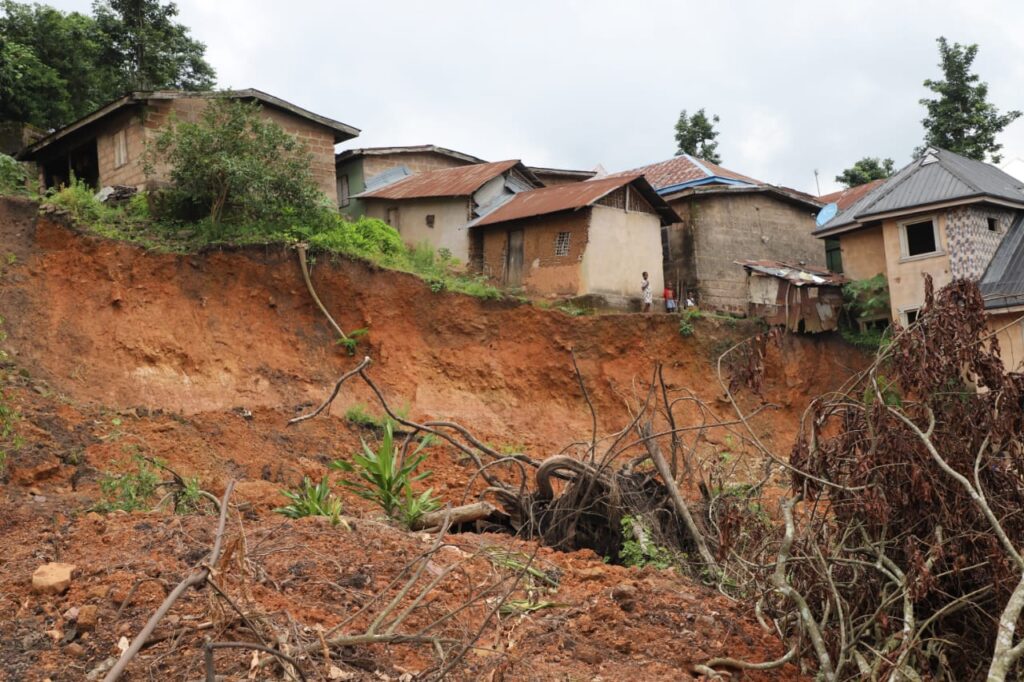 The lives of residents of hilly community of Ogwuma in Afikpo South Local government area are at risk following persistent landslides in the area.

Another landslide hit the community on Saturday destroying houses, economic threes and blocking the major road which runs through the community

Governor David Umahi on hearing the news, quickly visited the area on Monday to access the level of damage.

He solicited for financial intervention from the Federal Government to tackle the incessant landslide in Afikpo South Local Government Area which is threatening the lives inhabitants of the area.

He stated this while inspecting the landslide which occurred at the retaining wall of Ogwuma section of the Afikpo to Ohafia road near the ultra modern Iyere flyover that is being constructed on the road by the state government.

After assessing the extent of the landslide which blocked a section of the road leading to Ohafia in Abia State, Mr Umahi blamed the landslide on activities of those inhabiting across  the retaining wall.

He announced plans to immediately clear the road within seven days to enable Government know the best next line of action.

He said: “This is Ogwuma, a section of the road after Iyere flyover. It has been totally blocked by landslide, and since 2004, we have been having very serious landslide here.

“In fact, I lost one of my workers here about 2008 during the construction of a very heavy retaining wall which is what sustained this road from 2008 till few days ago.

“As you can see a lot of houses have sprang up there and so this had to disturb the ecosystem of this section of the hill and the effect is what you see.

“The road has been blocked and it is going to take quite a lot of efforts to even unblock the road, before thinking about how to reconstruct very long section of retaining wall.

“Nobody is passing through here just because of the activities of very few people. So, what my Government is going to do first and foremost is to ask everybody on that hill to leave.

“We have to take over the hill for people to continue to use this road, especially at this  time we have solved the problem of the Iyere Bridge which hitherto posed a serious hindrance on the road.

“We are going to look into how to clear the road. I am sure in the next seven days we should be able to deploy about five caterpillars, bulldozers and trucks to first of all, clear the road for us to see whether the slide is such that it could be contained.

“Otherwise we would have to block it until we are able to reconstruct the retaining wall. But there is no amount of retaining wall that can sustain this place if people still have a lot of activities up there.

“So we are going to make sure that we evacuate everybody there so that we can reconstruct it. We can inconvenience few people to advantage a lot of people. That is what we are going to do,” he said.

Governor Umahi said he will report the matter and seek for assistance from the Federal Government to enable his administration swing into action to save the road users and the community from the untoward hardship.

“We will do what we can, and we will report to the Federal Government for help. It is up to me to report and I am sure that Mr. President when I report, will approve immediately.

“But it is up to the due process people to know that people are suffering and help because we have a lot of things in our hands.