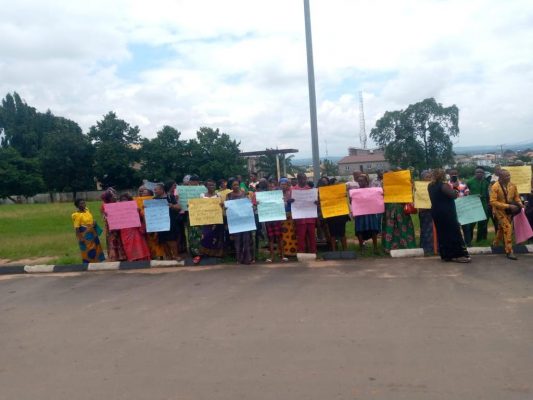 A group from Nkerehi community, Orumba South Local Government Area, have protested the purported change of the community’s name to Umuchukwu without due consultation with stakeholders of the community and members of town union executive.

The protesters numbering over fifty marched to the Government House gate Awka, displaying placards with various inscriptions like “Governor, please set up a panel to wade into Nkerehi/Umuchukwu crises,” “Please avert further bloodshed in Nkerehi,” amongst others which beckoned on the government for action.

Speaking on behalf of the protesters, the Secretary General of Nkerehi Progressive Union, Mr. Joseph Anulobi said the name of the community was changed over night without necessary consultations with indigenes and stakeholders in 2007, while some persons were allegedly directed by an individual to change the sign posts in the community without due consultation despite court orders against the change

Also speaking, Mr Basil Igwike, an indigene of the community said the forceful change of their ancestral name is most unfortunate, as a name is historical to a people.

He emphasized that all court processes must be respected to ensure that peaceful resolution of the issue, while calling on government to look into the issue with a bid to finding a lasting solution.

A government representative who addressed the protesters, Mr. Kingsley Nkume, commended them for their peaceful protest and assured them that their plea will get to the Governor.