By EditorSeptember 8, 2022No Comments6 Mins Read 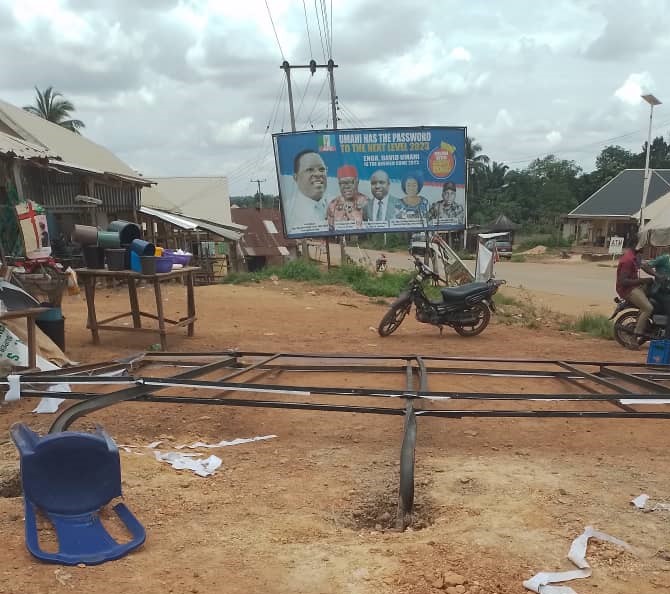 Operatives of the South-East Security outfit, Ebubeagu have again allegedly destroyed campaign billboards of the All Progressives Grand Alliance (APGA) in Ebonyi State.

The Ebubeagu operatives allegedly attacked members of the party in Okposi and Ugwulangwu communities in Ohaozara Local Government Area of the state who were mounting the billboards on Tuesday.

They were said to have fired into the air to disperse the APGA members before destroying the billboards in the two towns.

The recent incident follows an earlier attack two weeks ago in Abakaliki in which campaign posters of APGA Governorship and Deputy Governorship candidates for the 2023 elections, Bernard Ifeanyi Odoh and Nkata Nwani Chukwu were destroyed in Abakaliki, capital of the state.

A member of the party in Ohaozara who witnessed the attack, Collins Agwu said that the Ebubeagu officials first accosted him and other party supporters at the popular Okposi Court Area where they had wanted to mount a billboard of the APGA Governorship candidate and his Deputy.

Mr Agwu narrated that the Ebubeagu men who accosted them were seven in number and all dressed in Ebubeagu attire.

“They insisted that we cannot be allowed to mount billboards in the Court Area because according to them the area is owned by the government,” Mr Agwu said.

He said that as peaceful and peace-loving citizens, he and his boys moved to another point within the Okposi Round about to mount the billboard and were again confronted by the armed Ebubeagu members instituted by the State Government.

He said the leader of the Ebubeagu team, one Dickson Okire (a.k.a. Daggazy), and another identified as Sambo approached them and demanded if they had paid the relevant signage fees to the Local Government Council authorities.

He said that he replied that they were not aware that political parties now pay for their own billboard spaces at the Local Government.

Agwu said he however promised to go to the council to enquire and possibly do the needful as a law abiding citizen.

But the Ebubeagu men, all armed with pump action riffles, suddenly started shooting sporadically, insisting that everything must go down.

“Their ring leader, the said Dickson who started the shooting into the air said they were given orders from above to come and burn down the billboards and that there would be no peace until their evil mission was well accomplished as they were directed”, he said

The APGA followers who did not want to confront the lawless men reportedly scampered for safety at that point, some sustaining varying degrees of injuries.

The armed Ebubeagu officials who came in three Sienna vehicles confiscated and tore the flex banners and fled the scene still shooting sporadically into the air.

Other items which they also  made away with include; a full bag of cement, a digger, a pick axe and a cutlass/machete including two bags of graded stones and one bag of sea sharp sand.

The Ebubeagu team, it was gathered moved to neighbouring Ugwulangwu and carried out similar attack on the APGA members and billboards being hoisted there.

The APGA governorship candidate, Bernard Odoh, a Professor of Geo-physics, confirmed and condemned the attacks on the party’s supporters and campaign billboards.

Mr Odoh, in a at statement by his Media Aide, Charles Out, alleged that some supporters who tried to resist the Ebubeagu officials in Ugwulangwu sustained some minor injuries during the incident.

“We in the Odoh/Nkata Governorship train once again condemn these heinous attacks on our campaign materials and the continued threats which the Ebubeagu militia has posed to not only our members but to the generality of the peaceful and harmonious existence of our dear State.

“It is becoming glaring that despite several warnings; the Umahi-led APC government in Ebonyi and its candidates for the 2023 general elections are more prepared for war than discuss the numerous issues plaguing our dear state,” he said.

Mr Odoh called on security agencies to investigate the attacks on the members and the campaign billboards adding that it is still waiting for their findings on the earlier attacks in the Abakaliki metropolis.

He regretted that the party has not yet been informed if any arrests have been made so far despite its petitions to various security agencies.

“We call on all our supporters and members to remain strong, firm and unshaken in their belief in the Odoh/Nkata determination to bring a breath of fresh air into our polity by redefining our beloved Ebonyi State which everyone would be proud of.

“We know that the journey will not be an easy one as it has never been easy to bring a political revolution upon a land.

“But we remain unfazed and will continue to speak to issues and remain civil and polite in all our engagements before, during and after the 2023 general election which we are certain that the masses would give us their esteemed support,” he said.

Mr Odoh cautioned the Ebubeagu security outfit to desist from any further attempt to harm any of the party’s campaign materials and or members as that will no longer be tolerated.

“They do not have monopoly of violence and they cannot continue to remain a terror to our peace-loving supporters and people going into the 2023 general electioneering campaigns.

“It is becoming very glaring that contrary to the initial claims that the Ebubeagu militia was originally formed to tackle insecurity in the South-East, Governor Umahi had always prepared it as had been rumoured in several quarters to serve as a vindictive tool against his real or imagined political opponents.

“If their game plan as we now clearly understand is to intimidate, attack and scare away Ebonyi people from supporting and making their choices in the 2023 general elections then it is already dead on arrival.

“APGA has already been stamped on the minds and consciences of Ebonyians who earnestly desire a change to a more responsible and responsive leadership that would ultimately guarantee the freedom and economic prosperity of the suffering and deprived Ebonyians.”

Reacting, the Special Security Consultant, Ebonyi State, Chief Stanley Okoro-Emegha, explained that the State Government was not after the All Progressives Grand Alliance, APGA,  or any other opposition political party in the State.

He however insisted that the right thing should be done by all political parties.

He advised all parties to ensure they pay the requisite fees for such outdoor advert placement as stipulated by the state government.

“We are not after any political party. They should arm themselves with their payment receipt. Moreover, security agencies involved in enforcing the law is not only Ebubeagu operatives but a combined team including the Police and others.”

“Mounting of campaigns posters or any other materials without authorization from the state Capital Territory Board is practical disobedience to the State Government law”, he said

Mr Emegha further warned that according to the law, violators should be arrested and prosecuted accordingly adding that all political parties be it APC, PDP, AGPA must respect that law to the letter.