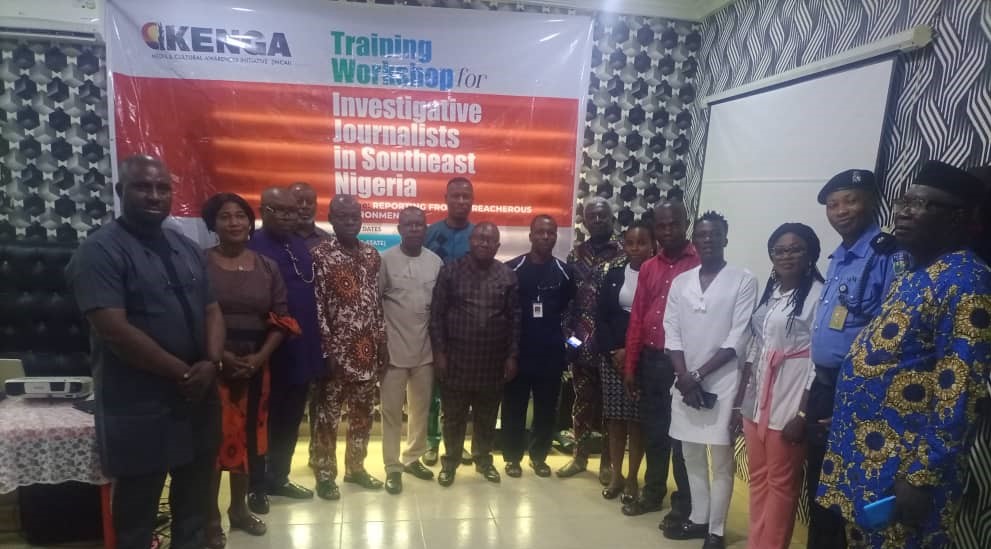 Ikenga Media and Cultural Awareness Initiative, IMCAI, publishers of Ikengaonline, has commenced training of journalists in the South-East on investigative reporting, ethical reporting, and safety measures in the line of duty.

The interactive exercise had in attendance journalists drawn from both the print media, the electronic as well as the online media.

One of the resource persons at the Umuahia session of the Workshop and Former Secretary to the Abia State Government, Elder Ralph Egbu, accused the Federal Government of using the National Broadcasting Corporation, NBC, as an instrument of intimidation to harass media owners in the country.

The former Commissioner for Information made the accusation in Umuahia while presenting a paper on “Ethical Issues: What Kind of News Is News.”

He frowned at the recent move by the Federal Government to withdraw the operational licence of over 50 broadcast stations in Nigeria, arguing that the action amounted to suppression of press freedom.

The Columnist advised Government to refrain from using NBC to harass broadcast media owners, arguing that only professionals and not Government could effectively regulate professional bodies.

“Government has no business regulating professional bodies; it’s only the professionals themselves who understand the job that can regulate themselves,” he said.

He, however, urged journalists to be responsible in their reportage and eschew sensationalism and falsehood.

Egbu also said that ethical reports should be objective, accurate and fair to all sides.

He urged Journalists to be alive to their responsibility of holding leaders accountable through unbiased investigative reports.

The former SSG advised Journalists to shun fake news and ethnic profiling as they are capable of setting the country ablaze.

He condemned the attempt in some media reports to link the presidential candidate of the Labour Party, Mr Peter Obi, with Biafra agitation, saying that such reports amount to ethnic profiling.

Similarly, Egbu argued that it was ethically wrong to associate the Fulani tribe with banditry or link any criminality in the South-East with the Indigenous People of Biafra, IPOB.

Another guest lecturer at the training, Dr Uwoma Uche, tasked journalists on investigative journalism which he noted “takes time and resources but very rewarding.”

He regretted that news reporting in Nigeria was still being challenged by politically- induced stories.

The Associate Professor of Mass Communication, further regretted that national interest had been eroded and substituted with what he called ‘regime interest.’

He challenged media aides of public office holders to stop being confrontational with critics of their principals but simply puncture any criticism with incontrovertible proofs of achievements by their bosses.

The Police Public Relations Officer, PPRO in the state, Mr Geoffrey Ogbonna, who spoke on safety, cautioned journalists to observe safety precautions in the course of duty especially while visiting disaster and crime scenes.

He advised against brandishing of their identify cards but to rather have them handy, and to avoid touching objects at crime scenes or going beyond the red tape.

In a remark, Mr Sampson Ademola of the WSCIJ, commended Ikengaonline for the training which he said would help to improve on the proficiency of the participants for better reportage.

He  urged them to focus more on the activities of states and local governments which he noted, were grossly under-reported.

Earlier in his opening remarks, Coordinator of IMCAI, Dr Chido Onumah, said that the training was aimed at educating South-East-based journalists on investigative reporting on many overlooked sectors in the zone to help draw national and global attention to them.

He charged them to utilise the knowledge they would acquire in the training to help bring the zone to the national media space .

Former Permanent Secretary and a veteran broadcaster, Sir Chimdi Oluoha, in a remark, decried the dictatorial tendency of the NBC, and called for a review of its activities.

“For now, what we have is not regulation but pure impediment against the broadcast media. It is a big error to close down broadcast stations.”

The former Radio Nigeria Correspondent regretted that those in authority always see the media as enemies instead of partners in progress.

Some of the participants including Comrade Obinna Ibe, Chairman of the Correspondents Chapel of the Nigeria Union of Journalists, NUJ; and the Bureau Chief of the News Agency of Nigeria, NAN, Sam Oditah, expressed delight over the training which they noted, had enhanced their proficiency.

The one-day training on investigative reporting for journalists in the South-East is part of the activities by the Ikenga Media & Cultural Awareness Initiative (IMCAI) under the Collaborative Media Engagement for Development Inclusivity and Accountability Project, CMEDIA, a multi-level intervention for media independence and government accountability, managed by the Wole Soyinka Centre for Investigative Journalism (WSCIJ) and supported by MacArthur Foundation.