Nigeria to collaborate with Finland to grow ICT sector – Onyeama

By EditorSeptember 23, 2022No Comments3 Mins Read 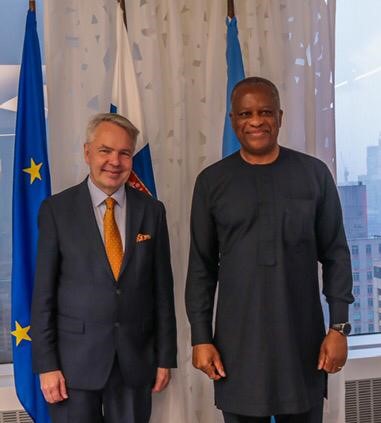 Minister of Foreign Affairs, Geoffrey Onyeama, says Nigeria will collaborate with the Finish government to grow the Information, Communication and Technology (ICT) sector in the country.

Onyeama disclosed this on Thursday in New York during a bilateral meeting with the Minister for Foreign Affairs of Finland, Pekka Haavisto.

The meeting was held on the sidelines of the ongoing 77th United Nations General Assembly in New York.

The minister described Finland as very strong in ICT, adding that they needed to leverage on the emergence of Nigeria as an ICT hub to expand their market in Africa.

He said that Nigeria was desirous of promoting different kinds of investments in the country.

“Finland is very strong in ICT and we believe that it will be a win-win situation if their companies invest in Nigeria.

“They can produce for the African market and take advantage of the African Continental Free Trade Area,” he said.

According to Onyeama, with a population of over 200 million people with strong youth presence and favourable economies of scale, Nigeria is fertile and a preferred investment destination centre.

“There are no fewer than 54 or 55 countries in Africa and you cannot set up your businesses in all the countries because some of the markets are very small.

“Nigeria is one-fifth of Africa and a hub with over 200 million people and a youthful population. So, you need to set up in a natural market where you have local scales and level of capacity to produce.

“If you produce in Nigeria, you already have a guaranteed 200 million plus market. If you are producing for such a market, you as well produce for the other 1.2 billion people in the continent,” he said.

Onyeama also said that Nigeria was one of the countries with the highest returns on investments.

He, however, said that there were things that the country still needed to further improve on to get the best partnership of western countries.

“Nigeria is an attractive investment destination for all these countries but we just have to change the narratives.

“There are several things we need to do as a country. The ease of doing business has to be addressed to attract investments,” Onyeama said.

He said that it was necessary to look into the future and find a way for greater collaboration.

The Finish foreign affairs minister described Nigeria as one of the most stable nations in Africa, adding that the bilateral relationship with Nigeria would be improved.