Ndigwe is an impostor - Commissioner 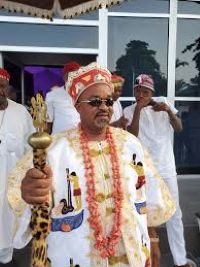 There was tension, Saturday, in Awka, the Anambra State capital, as policemen sealed-off the palace of the Obi of Awka Ancient Kingdom, Obi Austin Ndigwe to halt his new yam celebration.

Ndigwe had concluded arrangements to organise his Otite Awka 2022 (Iri Ji Ofuu) festival in his Awka Ancient Kingdom on Saturday.

Sources said some security operatives stormed the home of Ndigwe where the new yam festival was to be celebrated and dispersed the crowed that had thronged the place to participate in the annual ceremony.

The source said: “The policemen and the military chased everyone out of the palace, shooting canisters of teargas at youths who had attended the event.

“There was pandemonium when they started shooting, and a lot of people ran away, while many youths sustained injuries.”

Some journalists who were invited to the event were stopped by policemen from accessing the venue as they said they were acting on orders from above.

Ikengaonline reports that the sealing of the celebration venue might not be unconnected to the battle for the traditional stool of the town.

Obi Gibson Nwosu, Eze Uzu II of Awka, was crowned the traditional ruler and issued a certificate of recognition by the State Government but was purportedly deposed by some influential members of the community.

In his place, Ndigwe was crowned, and he immediately assumed the position of the monarch, causing the entire kingdom to be divided.

While some members of the community supported Ndigwe as their monarch, others supported Nwosu.

When journalists reached out to the Spokesperson of Anambra State Police command, DSP Toochukwu Ikenga, he said he was not aware of any order to seal off the palace of the factional monarch.

Efforts made to hear from the embattled monarch proved futile as he said he was in a meeting and could not speak.

But reacting swiftly, Anambra State Government has issued a statement signed by the Commissioner for Information, Paul Nwosu, banning Chief Austin Ndigwe from parading himself as the traditional ruler of Awka kingdom.

The statement warned Ndigwe to desist from portraying himself as monarch or risk sanctions and other consequences.

“It is a criminal offence and any such unlawful act in any part of the state would not be condoned by the Anambra State Government and the state will not hesitate to sanction the impostor according to the relevant Traditional Rulers Law of Anambra State 2007.” 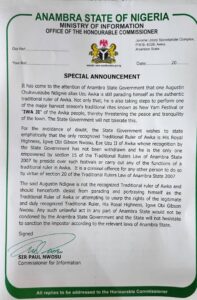