By EditorSeptember 9, 2022No Comments2 Mins Read 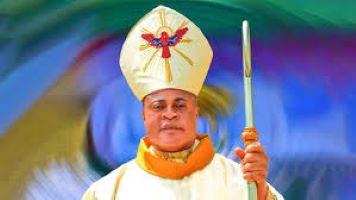 Anambra State Governor, Professor Charles Soludo alongside other Catholic Bishops, have pleaded with newly elevated Peter Cardinal Okpalaeke, to forgive the Diocese of Ahiara in Imo State for rejecting him as their Bishop.

At a thanksgiving Mass held at St. Joseph’s Cathedral, Ekwulobia, Governor Soludo, appealed to the Cardinal to forgive Ahiara Diocese.

He described the Cardinal as the rejected stone that later became the Chief cornerstone.

Soludo’s appeal for forgiveness was contained in a statement by his Chief Press Secretary, Christian Aburime, which quoted him as  further expressing the optimism that Okpalaeke’s elevation would bring blessings to the country.

The statement read in part: “Two cardinals in Africa and one of them from Nigeria; there must be something spiritual about it. I pray that this creation will become a point of contact that something new will happen in Nigeria – new ideas and courage to know the right thing to be done in Nigeria, the South-East, and Anambra State.”

In the same vein, Archbishop Augustine Akabueze who spoke on behalf of other Catholic Bishops, reminded the new Cardinal that his elevation was a call to additional service in the Lord’s vineyard.

“I implore God to bless you. Always say no to retaliation and exhibit a positive and forgiving attitude in this your new assignment. I thank the Governor of Anambra State. May all your plans for Anambra State find fulfillment in God’s name,” Akabueze said.

Recall that Okpalaeke was made  Bishop of the Imo Diocese by Pope Benedict XVI in 2012, but was allegedly rejected by the laity council and priests of Ahiara Mbaise  because he was not an indigene.

In 2020, Ekwulobia was carved out of Awka Diocese in Anambra State and Okpalaeke was installed  its bishop. Subsequently, Okpalaeke was elevated to the rank of Cardinal by Pope Francis on May 29 and received the red hat at the Consistory in Vatican City, Rome on August 27.