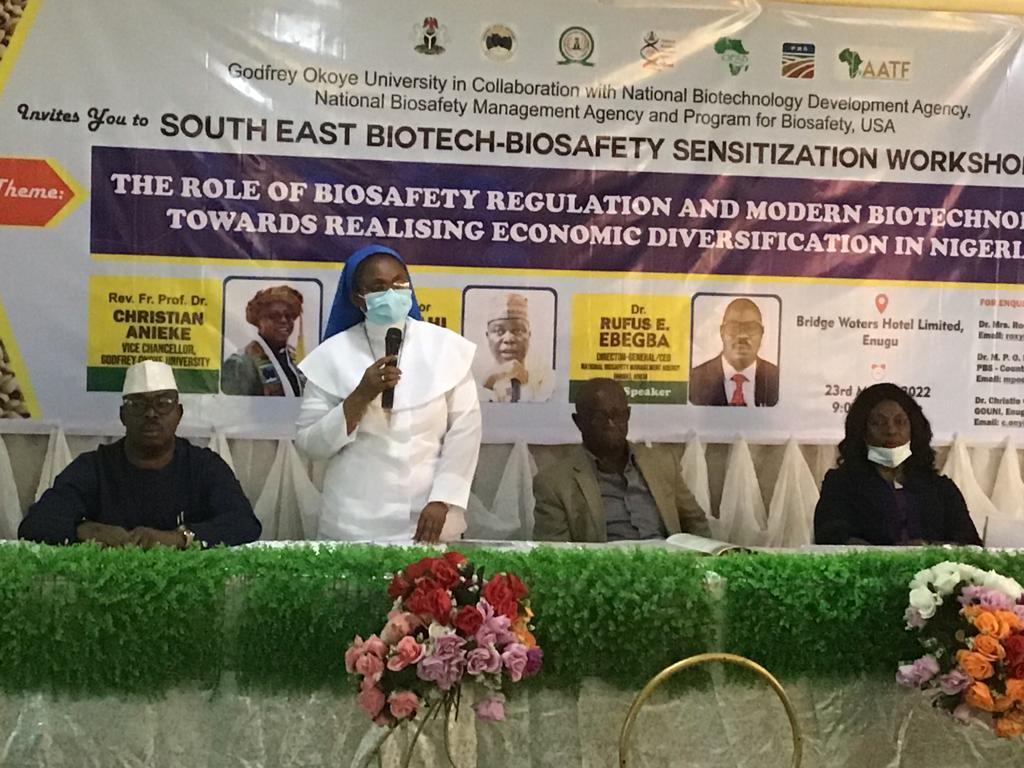 Mustapha disclosed this on Wednesday in Enugu during a South-East Biotech-Biosafety Sensitisation Workshop.

The workshop was organised by Godfrey Okoye University, Enugu in collaboration with NBDA, National Biosafety Management Agency (NBMA) and Program for Biosafety, USA.

He said that the prevailing situation required all hands to be on deck to fashion out strategies on how to improve and boost agricultural productivity to guarantee food and nutritional security.

He said that the workshop was part of on-going efforts to increase outreach and sensitization on Modern Biotechnology practice and Biosafety regulation in agriculture in the country.

“In the last 30 years, we were comfortable with agricultural productivity because, then, we had less people to feed and the soil was very productive.

“So even with aged farming population, we did not envisage food crisis. Today, we cannot afford such luxury as most of our population goes to bed hungry on daily basis,” he said.

He expressed worry that the farming population had also not improved, adding that the youth had rather completely left farming in the hands of the aged population.

“The workshop is to among other things open our eyes to the fact that we cannot continue to rely on the aged population to feed a nation of over 200 million people.

“We can also not rely on the same piece of land to be as productive as it was 20 years ago. The time has come for us as a nation to fully embrace technologies that will change our farming experiences,” he said.

He said that scientists across the world had over the years been working, seeking for solutions to the challenges confronting farmers especially as it relates to yield potentials of legumes.

He said that the difference between agricultural yield in Nigeria and other parts of the world was not only alarming but very disturbing.

“Our legumes are not performing according to their potentials. Hence, the introduction of technologies to ensure that our quest for food and nutritional security is guaranteed.

“The absence of good agronomic practices is another issue that is affecting agricultural productivity in this country.

“Farmers do not know that seeds saved from previous harvest need to be treated to become good quality seeds to enhance better performance,” he said.

He said that the NBDA was charged with the responsibilities of promoting biotechnology activities that positively respond to national aspirations on food security, job/wealth creation, affordable healthcare delivery, and sustainable environment.

Ikengaonline reports that a GMO is an animal, plant or microbe whose DNA has been altered using genetic engineering techniques.

However, Ebegba said that such products or foods were safe and properly scrutinised by NBMA before being released to the end points.

According to him, the agency carries out food safety analysis to make sure that the toxicity of the genes of inserts or organisms that have been modified do not manifest harmful toxins.

“The essence of the GMOs is to ensure alternative source of ensuring food security and to have raw materials to drive our industry.

“They have not come to replace conventional crops but are alternatives. It is going to co-exist with non-genetically modified organisms,” he said.

He said that the introduction of GMOs became necessary following the difficulty in solving the problems associated with agricultural crops using conventional methods.

“Any GMO approved in Nigeria is as safe as their conventional counterparts. So, let nobody tell you that GMOs are harmful. If not, government will not allow it,” he said.

He said that genetically modified seeds can be replanted.

Ebegba said that Nigeria had made much breakthrough in biotechnology such that biosafety agencies in other African countries were coming to learn from the country.

Earlier, the Vice Chancellor, Godfrey Okoye University, Prof. Christian Anieke, described the workshop as important.
Anieke who was represented by the Deputy Vice Chancellor, Prof. Mary Sylvia Nwachukwu, said that the world was being plunged into food insecurity.

The application of biotechnology and biosafety issues in agriculture would require wisdom from other disciplines.