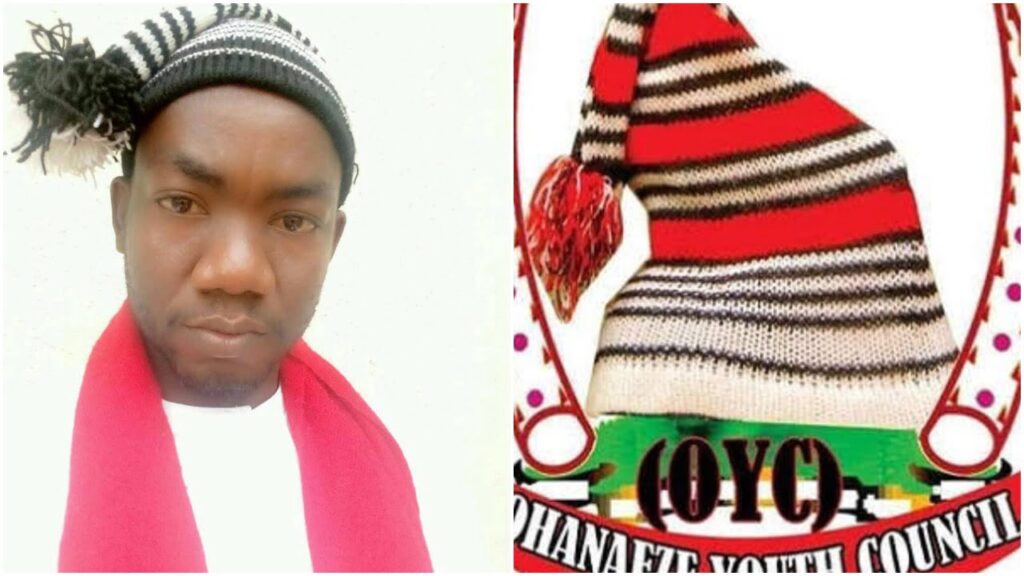 The youth wing of the apex Igbo socio-cultural organisation, Ohanaeze Ndigbo Worldwide, has raised the alarm that the Indigenous People of Biafra, IPOB; and the Eastern Security Network, ESN, have been hijacked by some criminal elements.

President General of Ohanaeze Youth Council, OYC, Mazi Igboayaka. O Igboayaka, who raised the alarm in a press statement, regretted that “criminals have hijacked the peaceful activities of the two groups especially ESN inaugurated to protect farmers in Igbo land, and have since then been rampaging the entire Southeast region.”

Igboayaka who is also the Spokesman of Indigenous Ethnic Youth Leaders of Nigeria, called on Igbo leaders and stakeholders in the region to rise to the occasion and halt the festering insecurity in the zone.

“Ndigbo must rise now to understand that armed criminal gangsters have taken over Alaigbo. Our traditional rulers, presidents of Town Unions and religious leaders all over Alaigbo ought to know that there’s a big challenge in Igboland and they must collaborate with Government to stop those behind this criminal act since over eight months in Southeast”.

The OYC helmsman, made a passionate appeal to the newly-inaugurated Governor of Anambra State, Professor Chukwuma Soludo, to help facilitate the release of the detained IPOB leader, Mazi Nnamdi Kanu.

Kanu who is facing a 15-count charge on terrorism and felony, has remained in the custody of the Department of State Services, DSS, since his rendition to Nigeria in June 2021.

Ohanaeze Youths believe that if Kanu were freed, the rising tension across Southeast following his continued detention would subside.

“Over 50 million progressive Igbo youths are passionately appealing to Gov. Hope Uzodinma and Gov. Charles Soludo to hasten up their efforts on the release of Mazi Nnamdi Kanu, to enable the security agents know the direction of security breaches in Southeast.”

OYC expressed worry over the festering insecurity in the region especially the recent bombing of the house of the President General of Ohanaeze Ndigbo, Professor George Obiozor, at Awonmanma, Oru East Local Government of Imo State.

Igboayaka strongly condemned the burning of Obiozor’s house by criminals, describing it as “a sacrilegious act and humiliating to the entire Igbo race”.

He regretted that “some faceless beings have sworn to besmirch Kanu’s reputation, hence they have disguised as IPOB and ESN members with a view to indicting Kanu, thus scuttling the attempts towards his release.”

The statement made available to Ikengaonline read in part: “Amb. George Obiozor symbolizes the new father of Igbo race. Burning his house has a deep significance.

“These gangsters have hit the academic and intellectual treasure of Ndigbo, by raising down Prof George Obiozor’s library that is quite very symbolic to Igbo political history.

“Our investigations have proven that hoodlums have taken over Alaigbo pretending to be IPOB or ESN, all in conspiracy and attempt to indict Mazi Nnamdi Kanu to scuttle his release, and the political solution being championed by Prof. George Obiozor the President General of Ohanaeze Ndigbo Worldwide.”

OYC also appealed to Professor Obiozor not to lose courage because of the senseless burning of his residence.

“It’s very painful to all Igbo youths. We appeal to Prof. George Obiozor not to lose courage in his genuine engagement with the Federal Government of Nigeria on the release of Nnamdi Kanu, but to see this painful event and the awful burning of his library as a last price he paid to redeem Alaigbo”

Igboayaka called on President Mohammadu Buhari to heed the various appeals by eminent personalities to release Kanu on political grounds.