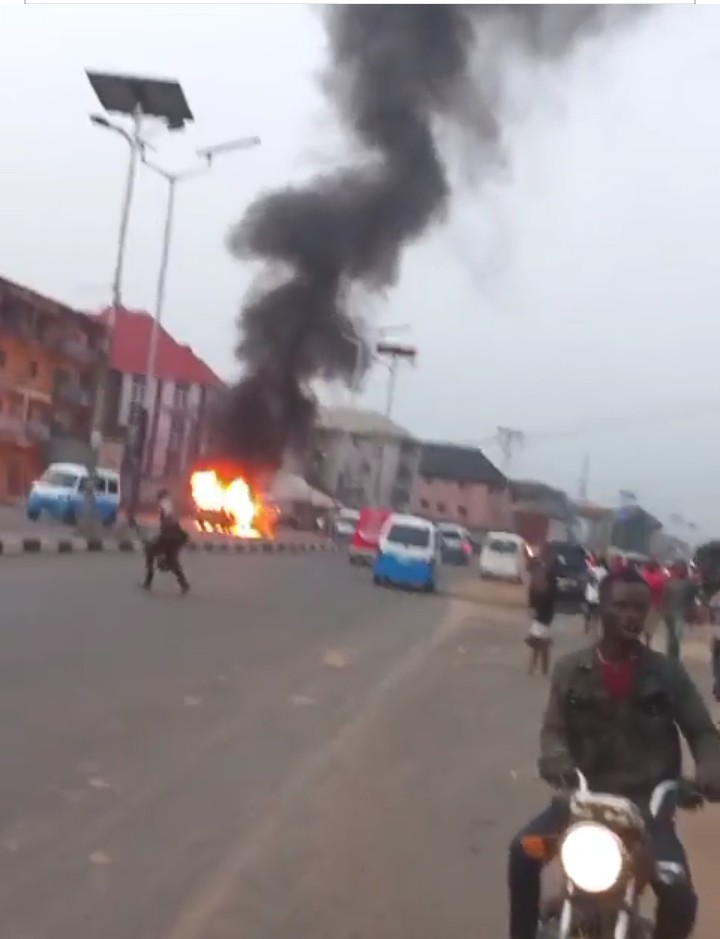 Angry motorists in Owerri, Imo State capital, beat up a tout suspected to be a member of the Nigeria Union of Road Transport Workers, NURTW, and set ablaze a vehicle he and other touts were using, for struggling with a trucker for the steering of his lorry, which led to the truck crashing other vehicles.

Ikengaonline gathered that the incident that occurred in front of St. Molumba Catholic church along Wethedral Road Owerri, drew the attention of passers-by.

One of the touts was captured by angry motorists as he was trying to flee the scene, and handed over to the police.

An eyewitness who spoke to Ikengaonline said the tout was dragging the steering of the truck with the driver in a bid to collect money from him when the accident occured.

“This is not the first time this is happening. They have been doing it for a long time. They said the truck drivers have a particular amount they pay before driving into the city. They do this morning and night along this road.

“You see how angry people even bus drivers that have been suffering this maltreatment in the hands of these touts came out and joined in beating the tout and others ran away when they saw the angry crowd and their car was burnt. Even while he was dragging the steering the truck damaged other vehicles along that road.”

Early in March 2022, an official of the NURTW, allegedly killed a bus driver, who was identified as Uzoma Onyeagucha, from Umunkweye, Irete in Owerri West Local Government Area of Imo state.

The bus driver was reportedly beaten to death by the touts.

However, the state Chairman of the NURTW, Mr Samuel Ude, had earlier denied any involvement of members of his union.