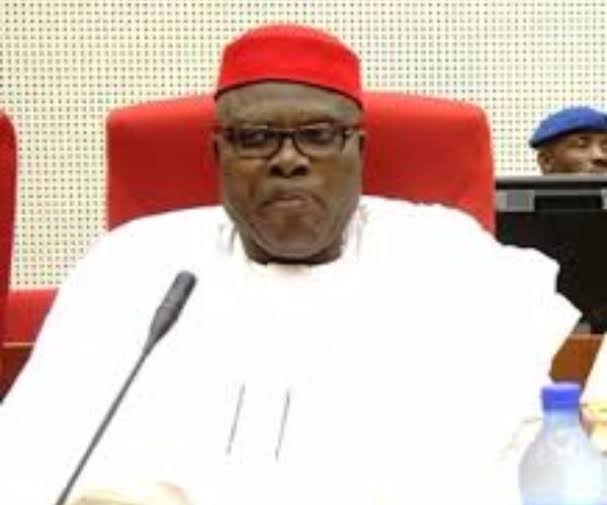 PDP had Saturday, ceded the party’s governorship ticket to both zones on the excuse that the duo parade the highest number of aspirants for the number one position.

Angry reactions have trailed the action as stakeholders from the party cry foul, accusing Gov. Okezie Ikpeazu, and the Dr. Asiforo Okere-led State party leadership of sidelining the party elders.

The political gladiators also allege it is a ploy by the Governor’s Ngwa clan to retain power beyond 2023.

Faulting the decision, former Senate President, Senator Adolphus Wabara, said it was ” absolutely unconstitutional for the party to make a zoning that is confusing and not clear-cut”.

Abaribe who has since declared interest in the governirship race claimed the action was targeted at excluding him from the race.

Similarly, elder statesman and the immediate-past Secretary to the State Government, SSG, Dr. Eme Okoro, who served under Ikpeazu’s first tenure, dismissed the zoning as “a child’s play which lacks any scientific basis”.

The former SSG who has been at the vanguard of power shift to Abia North in 2023, announced a total rejection of the zoning by Abia North senatorial zone.

Describing the action as a plot by the architects to safeguard their selfish political interest, the former SSG said Abia North would resist any attempt to change the goal posts in the middle of the game.

In the same vein, Abia youths under the auspices of Abia Youth Vanguard, have faulted the decision, describing it as “a smokescreen for the actualization of the self succession agenda of Ngwa people through Ikpeazu.”

They described the arrangement as “weird and shorn of sincerity with the capacity to throw the ruling party into a destructive crisis.”

According to a statement by its chairman, Comrade David Onwuneme, “if both the governor and PDP believe in the Abia Charter of Equity, the governorship should be zoned solely to Abia North because it is their turn.”

Senator Wabara who is the Secretary, Board of Trustees, BoT, of PDP, expressed surprise that the party could take such a far-reaching decision without first convening a meeting of the State caucus and party elders.

His words: ” The Governor and the party Chairman cannot stay in the comfort of their offices and zone the position of Abia governorship without due consultations.

” PDP is a party that has constitution. So, I don’t know where they got the whole idea from. As far as I’m, and many other leaders of this party are concerned, they did not summon a meeting of the caucus.

“I’m not sure other leaders attended any caucus meeting not to talk of attending any Elders’ Council meeting where such decisions were reached.

“I may not be a founding father of PDP but I am a founding member of the party. In 1998 when we founded this party, I did not see the likes of Okezie and Asiforo there.”

The former Senate President who represented Abia South at the beginning of the current democratic dispensation in 1999, dismissed the zoning as “unilateral, childish and laughable”.

“So, it is laughable that the state party Chairman went on tour of 17 party LGA offices and then came up with this childish zoning. That’s not where decision on zoning a vital office as the governorship of Abia State is taken.

“It cannot be taken at the tour of where they are being received with fanfare. That’s not where such an important decision is taken.

“The governor is our leader. Let him tell us where the decision on zoning was taken. Although I may not be on the same page with him, others and I should be in the meeting where zoning will be discussed.

“We were not invited to such meeting and I’m not sure any of such meeting held at all. So, you can’t come from behind and say you are zoning to two districts at once.

“The Governor cannot unilaterally zone the position. The state party chairman does not also have the powers. It’s only in Abia that things are turned upside down.”

Senator Wabara asked Gov. Ikpeazu to copy the openness of his predecessors who left no one in doubt of where their preferred successor would come from.

“It is true the Governor said he had seen two transitions but was this how his predecessors handled their own? They made pronouncement and we followed. We did not follow blindly. We followed because they consulted widely.

“Zoning one office to two districts is not in our constitution. It has never happened before. Any law made from answer to question cannot stand the test of time. The governor should know that, he is a Ph.D holder.

“He cannot read our constitution upside down and use excessive force because he is the governor. No, that won’t work!”

The PDP BoT Secretary who had last week warned the party against allowing another Ngwa man fly the party’s governorship flag in 2023 or lose Abia State as that contravenes the prevailing zoning arrangement in the state, said he still stood by his earlier position.

“I still stand by what I said before: If things are not done the right way, PDP will lose Abia State. So, we should try to do the right thing.

“The governor said that very soon he will show the way. By the time he shows us the way, he will now realize the full error in zoning governorship position to two senatorial districs with the flimsy and illiterate excuse that there are so many aspirants from both zones.

“Is that not why there is zoning to address such cases? This their zoning is absolute confusion, and he is still planning to blindfold us by leading us to the wrong way so that he will accommodate his interest of handing over power to another Ngwa man”.

The former Senate President vowed not to be cowed from speaking truth to power, saying he is ready to lay down his life in the defense of the right cause for the good of Abia.

“The worst that can happen is for me to be killed but I’m prepared to die at 74 if speaking the truth warrants that”.

Corroborating the position of Senator Wabara, Dr. Okoro said that elders of the party were not consulted before “the said zoning was done”.

“Principal stakeholders at all levels must be consulted and be part of the process. You can’t zone to two out of three senatorial zones. It’s confusion! At no time since PDP was formed was zoning to two districts done. I’m bemused.

“People making this decision are either trying to become despotic in a democratic space which will never happen or they want to be funny. We are not all stupid in this state. We can’t tolerate it”, he vowed.

The former SSG noted that although the incumbent governor has inputs on the selection of his successor, other necessary stakeholders have to be carried along.

“Principal stakeholders of Abia North origin are interested in the stability of the state. We are also interested in recognizing the God-given process of arriving at a successor. We appreciate that the governor who is about to bequeath that position to somebody else will make an input as his predecessors made at their time but there must be consultations, participatory approach, and recognition of the formidable actors of the party”.

Abia Youth Vanguard urged PDP to rescind the decision or brace up for protest vote in 2023, insisting that Abia should would not tolerate anything that will truncate the charter of equity in the state.

“The zoning started in Abia North in 1999, with Orji Uzor Kalu, then it went to Abia Central in 2007 with TA ORJI after which it got to Abia South with the incumbent, Okezie Ikpeazu in 2015. Naturally, it should return to Abia North in 2023”.

They said it was strange that the zoning arrangements since 1999 had always been for one zone at a time and never two zones as announced by PDP.

According to them, “it is also weird that Abia central which handed over to Ikpeazu just seven years ago is included for the 2023 contest because of the quest for self succession”.

The group drew the attention of the governor to the fact that his predecessors were never ambiguous in their choice of successors with the Abia Charter of Equity in mind.

They said that when Ikpeazu told a delegation of Bende people who visited him that he will point the way, they expected him be explicit and not throwing the state into confusion and crisis.

“His predecessors were explicit and unambiguous and that’s why the people followed them. You can’t point to a thick forest and expect us to follow sheepishly”, they pointed out.

They advised the governor to learn from what happened to Gov. Rochas Okorocha of imo state when he tried to foist his son in-law as his successor.

They argued that since the governor claims that his only visible achievement in the state in the last seven years has been peace, he should choose a successor from Abia North to sustain that legacy.

They warned that “the continuing attempt by Ikpeazu and his hirelings to foist an Ngwa man as his successor will have a catastrophic consequence in the state.

“For him to avoid the impending chaos and for him to secure his political future, His Excellency should in the next 72 hours pick his successor from Abia North. That’s the way he should point to us and we follow”, the youths ordered.

Senator Abaribe in a statement on Sunday said:
“My attention has been drawn to a document signed by the State Chairman of the Peoples Democratic Party, Dr Alwell Asiforo, purporting that Abia State PDP has zoned the Governorship seat to Abia North and Abia Central and wish to assure all Abians who are desirous of an end to IMPOSITION in Abia State to disregard the purported zoning for the following reasons:

“While any member of PDP has the right to support anybody for any elective position in Nigeria, it cannot be to the exclusion of any other member.

“It is obvious that the statement was merely formulated to exclude me from the contest.

By virtue of section 42(2) of the Constitution of the Federal Republic of Nigeria 1999 as amended, no person or body can exclude Senator ENYINNAYA ABARIBE (Nma Agha Ndigbo) from contesting and winning the 2023 elections in Abia State”.

Abaribe who hails from the same Abia South senatorial district of the incumbent Governor Ikpeazu, insisted on running in 2023.

He urged his fans as well as PDP faithful in the state to remain calm.

“All PDP members and Abia citizens are therefore urged to remain calm and participate in the forthcoming congresses and primaries where your voice will be heard as we dismantle the CABAL that want to keep Abians subjected to further years of IMPOSITION.

It is only Abians that will decide who will be their Governor in 2023.”