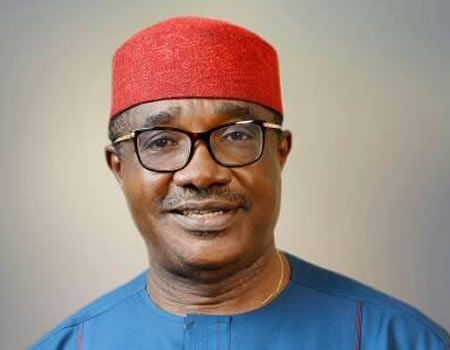 Worried by the festering insecurity in the country and the economic malady, Senator Mao Ohuabunwa, has warmed that if no urgent measures were taken to halt the spate of insecurity in the land, Nigeria may collapse before 2023.

Senator Ohuabunwa who represented Abia North in the 8th Senate, expressed rage over the worsening insecurity which he warned might soon engulf Nigeria.

The former Leader, ECOWAS Parliament, who gave the warning when he visited victims of the recent flood disaster in Nkporo communities of Ohafia Local Government Area, Abia State, said “Nigeria is on the precipice.”

Ohuabunwa cited the ambush of the troops of the Presidential Guard on patrol in Abuja by terrorists; the massacre of 14 youths in Imo by security agents; the incessant kidnappings for ransom in Abia North, and other parts of the country, as danger signals.

The former Leader, House of Representatives, lamented that the All Progressives Congress, APC-led Federal Government “is watching helplessly while Nigeria is sliding into destruction,” urged Nigerians to end “the APC-inflicted pains using their PVCs in 2023.”

According to him, Nigeria may not survive beyond 2023 if APC retains power at the centre.

He appealed to patriotic Nigerians to jettison party and tribal sentiments and support the on-going efforts by  progressives to rescue the country from political hijackers.

“The solution is a change of government at the centre in order to give Nigerians hope once again,” he submitted.

“Our country is in a period of its worst threat to lives and property. You can agree that we can’t afford to allow things to continue the way it’s going. If we don’t do anything to change the scenario, then we will have no country again.

“The only way we can achieve this is through the 2023 general election,  I therefore urge you all to get PVCS and vote  for a candidate that will restore our hope in Nigeria again.”

Ohuabunwa who is the senatorial candidate of the Peoples Democratic Party, PDP, for 2023 Abia North contest, also decried the level of devastation by flood which wreaked havoc in Nkporo communities, destroying buildings, property and crops worth millions of Naira.

He regretted  that flood from a small river was still causing havoc in the community in the 21st century due to failure of Government to dredge the river that flows through the communities to Ebonyi State.

Ohuabunwa called on the Federal Government as a matter of urgency proffer a permanent solution to the flood menace in the area which has become so rampant.

Senator Ohuabunwa also called on the Federal Emergency Management Agency, FEMA, to deliver relief materials to the victims in the affected communities.

“I sympathize with this community for the loss of properties caused by the flood and can assure that by the grace of God when I return to the Senate, we will attract the attention of the Federal Government to solve this flood problem permanently.

Responding, a community leader Chief  Ndukwe U. Ndukwe, commended Ohuabunwa, for his concerns for the community and those affected by the flood.

He regretted that the periodic flood menace had persisted for decades without the Government doing anything to stop it.

“This flooding in our community is a small case if the government can look into it.

“Our forefathers had suffered the same flooding menace and we are still suffering the same thing today.  We are calling on the Federal and State Governments to look into it solve the problem once and for all.”