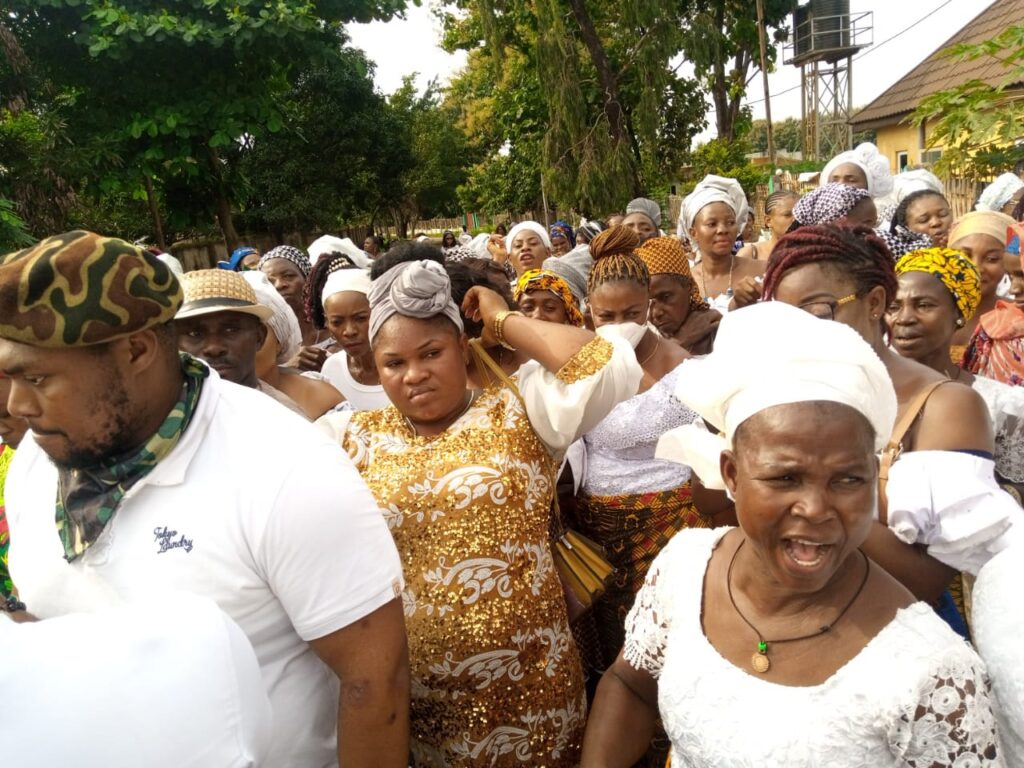 In what looks like a clear case of abomination in Igboland, gunmen suspected to be members of Ebonyi chapter of Ebubeagu South-East Security Outfit on Saturday allegedly attacked women holding their August Meeting programme.

The incident happened at the Peoples Club along Abakaliki-Enugu Highway in the capital city of Abakaliki.

The meeting was said to have been convened by over 17 women groups  with a view to empowering the women.

The women were said to have gathered from the 13 local government areas of the state in their hundreds when the gunmen stormed the venue and started shooting sporadically into the air forcing the women to scamper for safety in various directions.

Sources said some persons were arrested and bundled away from the venue by the gunmen.

Journalists from various media houses who were invited to cover the event were also chased away from the venue and threatened with attack if they tried to record the gunmen’s action.

The gunmen were said to have also carted away the canopies and chairs at the venue to an unknown destination.

The women later regrouped and staged a protest in some streets in the city.

Addressing the media, they accused the state governor, David Umahi, of orchestrating the attack which they called a desecration of womanhood.

In a statement signed by Mrs Amaka Chukwu and three others on behalf of the protesters, the women described the disruption of the meeting as a denial of their fundamental human rights as enshrined in the Nigerian Constitution.

They said: “Articles 15(2) and 42 (1) a & b (2) (3) prohibit discrimination on the basis of sex and ensure that men and women have equal access to the courts in matters of contracts, torts and civil matters.

“This abominable act was carried  out by the Executive Governor of Ebonyi State, Engr. Dave Umahi, through his attack dogs, the Ebubuagu Security outfit of Ebonyi State.

“It is not new or alien to the Igbo race that the entire women meet every August to discuss and chart the best possible developmental ideas and projects to improve the well-being and welfare of our people,” they said.

Continuing they noted that the governor has over time maintained an enviable streak of antagonism against the womenfolk.

“This includes the manhunt for the Ebonyi South APC senatorial aspirant, Princess Ann Agom-Eze, who is currently on exile outside for aspiring to serve her senatorial district.

“Also, delegates from Afikpo were forced back by another detachment of Governor Umahi’s Ebubeagu militia who fired sporadically at the hapless women,” they alleged.

The Special Assistant to the Governor on Internal Security, Panchris Eze said the Ebubeagu outfit were at the venue based on a tip off that some pro-separatist groups were gathering there.

He said the group sacked the women from the venue so as to forestall any security breach in the area.

He, however, denied that his group stripped anybody naked.

The Security Consultant to the State Government, Stanley Emegha, also confirmed the disruption of the meeting.

He said the disruption was due to security reports the outfit got that the venue was being used as a staging ground for attacks on various security outfits in the town and vowed that those arrested will be prosecuted.

He warned against such gathering in Abakaliki Capita City.

“Anybody who wants to do August Meeting should go to their respective villages to and do it,” he said.

The governor’s spokesperson, Chooks Oko said Governor David Umahi was not aware of the incident as he traveled out of the state.