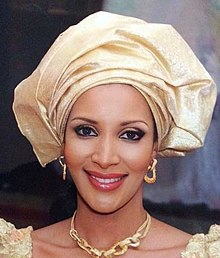 Former Nigeria’s Ambassador to Spain, Mrs Bianca Ojukwu, has advised Nigerians in diaspora to continue to promote their rich cultural heritage for the socioeconomic advancement of the country.

Ojukwu gave the advice at the official flag-off of the 2022 edition of Igbo Cultural Carnival popularly known as IGBOFEST, held in the State of Minnesota, United States of America (USA).

A release issued by Barth Odogwu, Media Assistant to Mrs Ojukwu and made available to journalists on Thursday in Awka, quoted her to have praised Nigerians in Minnesota for their giant strides in the promotion of the country’s rich culture.

“I enjoin you to continue to promote the noble traditions and culture that have helped shaped the world view whilst always striving to transmit same to your off-springs.

“Our Cultural heritage is what shapes our sense of identity, it promotes social cohesion, creates a sense of belonging and collective pride in the norms and traditions which our ancestors bequeathed to us,” she said.

The former ambassador used the event to advise the large gathering of Ndigbo that unity was key in realizing the socio-economic and political advancement of the race both at home and in the Diaspora.

“We must unite to achieve our common goal. I know you are concerned about happenings at home, do your best certainly the will of God will come to pass in our life time,” she said.

Dr. Mrs Jane Nwaudo, President of Umunne Cultural Association, Minnesota, in her remarks said the association has made significant changes in their philosophical principles by encouraging collaborative efforts with other entities in the USA.

Nwaudo said, the group focused on cultural heritage legacy to strengthen the link with a new generation of youths of Igbo descent, born and raised in the United States of America.

“This association has continued to empower our youth financially through offering scholarships to high school graduates, promoting cultural activities and pageants to instill greater self esteem and pride in their identity,” Nwaudo said.

Earlier, the chairman of the event, Mr Elvis Abanonu, highlighted the theme of 2022 IGBOFEST as Creating  Cultural Awareness for the Next Generation.

He said that the survival of any society or culture is solely dependent on the passage of its norms and principles to the next generation and encouraged participants to always cherish their identity.

The well attended event by Nigerians in the diaspora especially those in the USA was hosted by Umunne Cultural Association Minnesota.