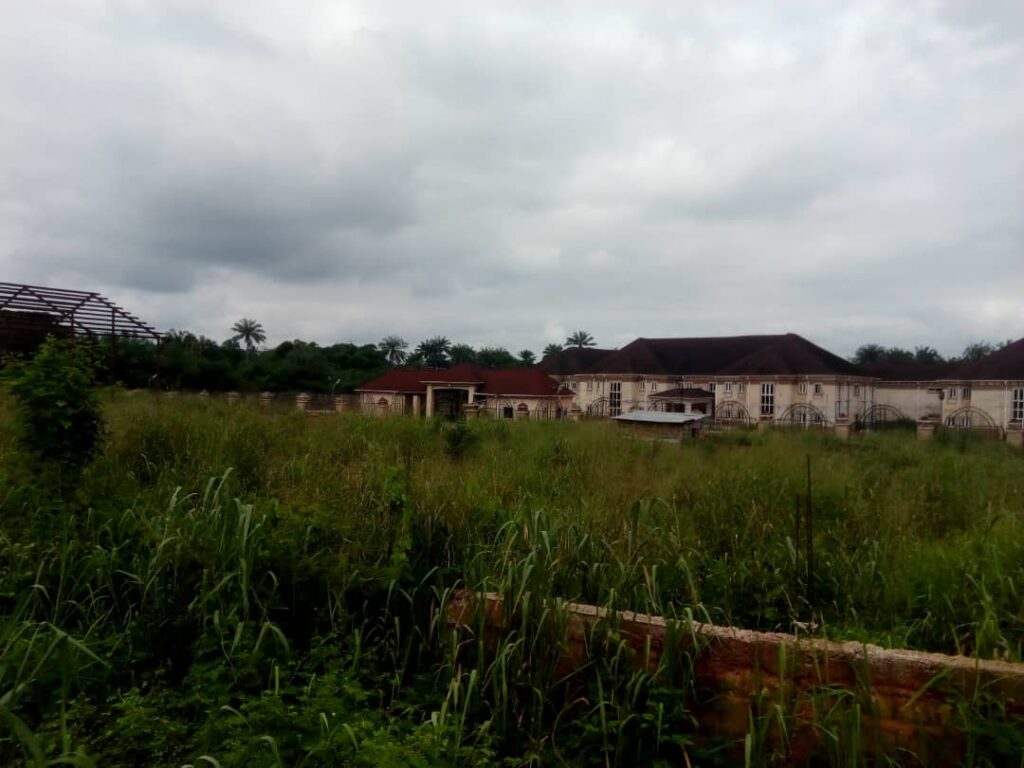 As many  aggrieved Imo citizens wondered why Justice Inyang Ekwo, the trial judge in the N2.9 billion fraud case which the EFCC brought against the former governor of Imo State, Rochas Okorocha, allowed him to ‘travel’ to the United Kingdom for Medicare instead of directing him to use one of the 27 general hospitals he bequeathed to the state, Ikengaonline decided to ascertain the condition of those hospitals by visiting at least two in each of the three senatorial districts in the state. What our Reporter, Nonsochukwu Uwa, uncovered is a haven for rodents, reptiles and drug users.

You must have heard the former governor of Imo State, Senator Rochas Anayo Okorocha shamelessly boast of how he built 27 hospitals, one in each of the 27 local government areas in the state during his tenure. Let’s for once excuse the former governor of his messianic posturing as if he dipped into his own personal purse to fund the hospital projects. No. Those so-called 27 general hospitals cost Imo State a whooping N27 billion. Yes, N1 billion for each of them!

As a man who loves his people so dearly, the people whom indeed he theatrically refers to as “my people, people,” you would expect the former governor and his family to be patronising one of the 27 hospitals he built particularly the one in his home local government for their health needs. As we file this report, Rochas Okorocha is allegedly on health tourism abroad, at least that is what he told the court.

Recall that the former governor who is standing trial for N2.9 billion fraud in a case brought against him by the Economic and Financial Crimes Commission (EFCC) in Abuja had recently asked the court to allow him travel to the United Kingdom for medical care, which Justice Inyang Ekwo granted.

Rochas Okorocha probably is in a foreign land enjoying first class medical facilities and care which elude Imo citizens even after spending N27 billion on general hospitals in his ruinous eight-year reign as governor in the state.

Ikengaonline investigation has revealed that most of the so-called General Hospitals built by former Governor Rochas Okorocha of Imo State in the 27 Local Government Areas are in a state of dilapidation with many of them uncompleted.

The ex-Governor had claimed that he invested N1 billion in each of the 27 hospitals sited one in each Local Government Area.

But findings have indicated that most of the buildings are in a sorry-state as some of them have been overgrown by weeds while others now provide shelter for rodents and reptiles.

A number of others have simply become hideouts for hoodlums and drug addicts.

The sad story of dilapidation in the various hospitals  visited by Ikengaonline is just the same.

It was also discovered that the concessioning of some of the buildings by the ex-Governor, under the Public Private Partnership (PPP) arrangement to security agencies and religious bodies, is still a subject of controversy.

Some of the concessionaires are still carrying out major structural remedial works to fortify the buildings and prevent them from collapsing.

A visit to the General Hospital building located at Amafor community, revealed that the building has been overgrown by weeds.

It was also discovered that contrary to claims by the former Governor, the building was an uncompleted structure though roofed but without widow panels and doors in place.

Our Correspondent was told that recently, Government ordered for the clearing of part of the building which it gave out to a council official in the area as an operational office.

A community Leader who gave his name as Mr Sylvester Onyekwere, in an interview with our Correspondent said: “This building has been taken over by bushes. It was abandoned for years. It was only recently that we saw some boys clearing the road maybe this present government wants to use it for Local Government activities.

“Before now these bad boys used this building as a hideout for intake of hard drugs. In the evening you find it difficult to come around here because you see strange faces moving in and out of the forest.”

When Ikengaonline visited the hospital building at Ulakwo in Owerri North LGA, it was discovered that it was one of the buildings Okorocha handed over to the Nigerian Air Force.

Our Correspondent sighted only one ambulance parked in front of the building and three persons at the security house one of them in an Air Force uniform.

Although no patient was found going in or leaving the hospital, an Air Force officer claimed that the hospital was functional but prevented our Correspondent from going inside to confirm.

But an indigene of the area who spoke on condition of anonymity told Ikengaonline that the hospital is not functional though it is now completed by the Air Force.

“We will not allow you to go in. We allow those who are sick and when you come we will take care of you. We only allow sick people to enter,” the officer said.

Upon further enquiries by Ikengaonline the Officer said: “It is not long we started operating. We, first of all did some serious work both inside and outside at least to get to some level we can use.”

Visiting the structure located at Umunachi Community in Isiala Mbano is now very risky following the security challenge in the state.

This is because the operatives at the security checkpoint directly opposite the building subject visitors to frustrating scrutiny.

After passing through the security checks, our Correspondent discovered that the supposed hospital building itself has been converted into a security base with security vans parked everywhere.

It was also discovered that the structure is yet to be completed.

The surrounding of the building was covered with bushes on all sides especially at the back.

A resident who pleaded anonymity for security reasons told Ikengaonline that “heightened insecurity within the area and Imo State at large necessitated the need to establish the security formation in the area to stop the burning of police stations and killings.”

A visit to Umuowa community where the said hospital was located revealed that the supposed General Hospital has been converted to a school.

It was gathered that the building was handed over to Merit College of Nursing and Sciences, Umuowa in Orlu LGA.

Shockingly, no academic activities were going on at the institution as it has been under lock and key for a while.

A security guard  around the entrance gate told our Correspondence that the building was undergoing reconstruction due to its poor original construction.

According to him,  the reconstruction began when Okorocha handed it over to the College.

“Immediately after the handover, the College Management started from the re-roofing of the building and general reconstruction, both the interior and exterior, to raise it to the needed standard,” he said.

A visit to the site of the hospital at Okwelle revealed yet another horrible sight as the building was already overgrown by bushes with tall trees right inside it.

The situation at Onuimo appears to be the worst of all the hospitals visited as the uncompleted structure could only pass for a bush safe for the roof which is hardly seen as it has been covered by trees.

However, our Correspondent was nearly manhandled by some hoodlums who claimed to be security guards at the premises as they saw him take some picture shots.

In the end the hoodlums some of whom were smoking substance suspected to be marijuana extorted N1500 from him in exchange for his freedom.

When our Correspondent visited Nworieubi, the location of Okorocha’s General Hospital at Mbaitoli,  it was discovered that the situation was not different from what was observed in other LGAs.

The structure which was under lock and key was looking unkempt and the premises was taken over by weeds.

Some dysfunctional vehicles were parked by the side of the building making it look more like a dump site or  a mechanic workshop.

Interaction with some locals revealed that the building had been under lock and key for a while.

“It’s been long that the building has been locked and only on a few occasions that some persons who looked like Government officials came around and entered and later came out,” one of the locals said.

In all the sites visited by our Correspondent, none of the supposed hospitals was discovered to be functional despite claims by the ex-Governor.

Okorocha had said that he embarked on the construction of the said 27 buildings as General Hospitals, one in each LGA, to ensure that Imo people enjoyed quality and affordable health care.

While handing over the structures to the concessionaires, he had declared: “Government has spent N1bn in each of these hospitals. We hope that through you the hospitals will render the services for which it was built.”

Part of the agreement include a lease  for 25 years, a moratorium of 18 years and a monthly rent of N100,000 through PPP.

Meanwhile, the Imo State Government told Ikengaonline that every structure built by Okorocha administration had durability issue, regretting that a number of them have already collapsed.

Commissioner for Information and Strategy, Declan Emelumba, said: “Anything structure built by Rochas Okorocha is suspect because you have to do an integrity test to be sure that it is even habitable. Evidence abounds. Look at the Imo International Convention Centre, ICC, which has collapsed.

“The Police headquarters he built for the police has also collapsed. They said they can’t move into the building. Everything  he did was substandard. The Government will not be in a hurry to determine what to do with it. The first thing is to do an integrity test to know if these are things human beings can use if they can endanger their lives.

“If we want to site a hospital, we put it in a central area where people are and accessible area for the people that hospital is meant for. Only God knows why he did it this way.  This was a man who said he built 27 General Hospitals and the other day he was applying to travel abroad to seek medical treatment.

“By that application he made he told the whole world that he never built any hospital in Imo state otherwise he would have been proud to be treated in one of the hospitals that he built in Imo State.

“When Government concludes its integrity test and it can be used by human beings and habitable, then we know. It may not necessarily be converted into a hospital but depends on what it can best be used for.

“Yes he erected 27 buildings while at the same time he neglected the existing General Hospitals in the different LGAs.  Instead of fortifying those hospitals, he went as far as building other structures he  called the hospitals.”

When Ikengaonline visited the Ministry of Health, along Port Harcourt road in Owerri, all efforts to get reactions from the state commissioner for health, Professor Prosper Ohayagha Success Obinna, did not yield any dividend.

But credible sources within the Ministry of Health told Ikengaonline that some of the 27 buildings of the hospitals were still abandoned because the present governor, Hope Uzodimma, was yet to give a directive on how to use the buildings.

“That report came during the 7 months of Emeka Ihedioha as governor, and now the current administration of Hope Uzodimma as governor of Imo State. Part of the report was that the buildings were not habitable which was a major issue. Since then, no concrete action has been taken so far.

“Both Ihedioha and Uzodimma never showed interest in the buildings. They were not considered very important and a quick decision to make,” the staff said.

This Report is part of activities by the Ikenga Media & Cultural Awareness Initiative (IMCAI) under the Collaborative Media Engagement for Development Inclusivity and Accountability Project, a multi-level intervention for media independence and government accountability, managed by the Wole Soyinka Centre for Investigative Journalism (WSCIJ) and supported by MacArthur Foundation.