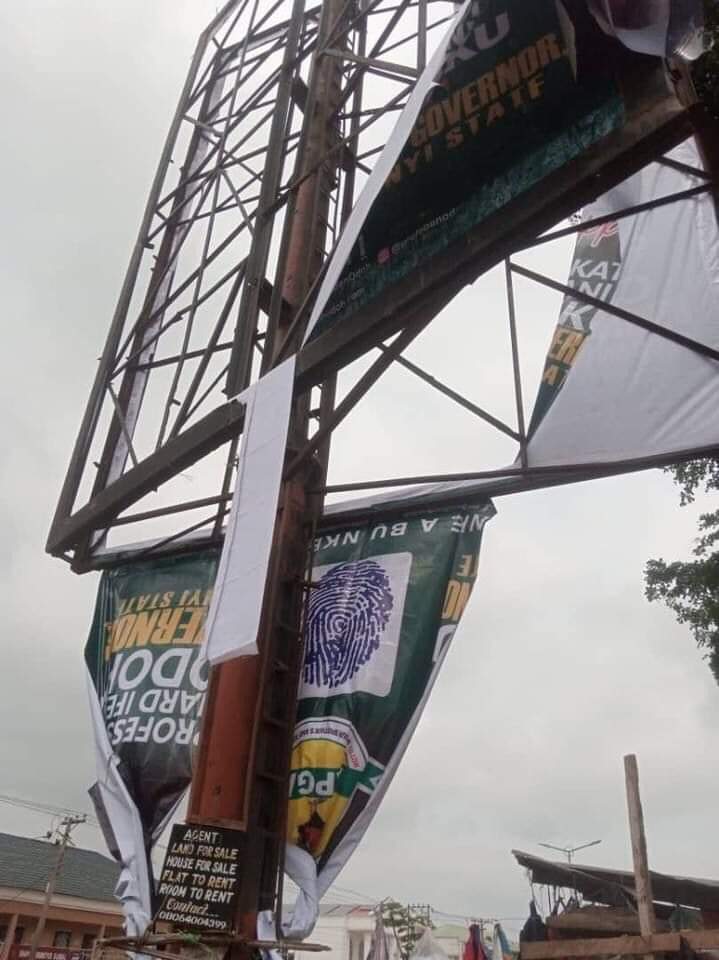 Ebonyi State governorship candidate of the All Progressives Grand Alliance, Prof. Ben Odoh, has condemned the attack and destruction of his campaign billboards in the State.

In a statement issued in Abakaliki, Odoh accused agents and thugs of the State Government as responsible for the act.

As he explained: “the genesis of the mindless attacks on our billboards which occurred last night, Sunday, August 21, 2022 (because we saw it still hanging hours after the professional handlers, Rocana Nigeria Ltd had hung them) was that the state government, obviously jittery of the momentum gained by our consultative engagements in the state so far pasted a “Remove Ads” notices on them.”

“The  “Remove Ads” was as a result of our advertising handlers refusal to surrender the billboards which we had already paid for to the APC Candidate who had earlier requested for them at all cost.

ROCANA are not in any way and form owing the state government .

As law abiding citizens who understands the place of professional engagements in matters such as this, it was only incumbent that we reach out and inform the advertising agency- Rocana, which has professionally operated in the state and the entire South-East in the last few decades about the “remove ads” notices placed by the Ebonyi State Government on the billboards with it’s official seal.

They promised to reach the state government and get back to us as soon as practicable.”

“Some  hours after, we discovered that the billboards have already been torn and removed forcefully, suspectedly by desperate agents of the state government.

Some of the billboards are still hanging, facing downwards and there have been no explanation offered the professional advertising agent – Rocana who has maintained that it has been paying the Ebonyi State Government it’s taxes, dues and other rates as and when due.

“This  to us is an act of cowardice by Governor Umahi and his army of political bandits. To prove our fears and suspicion right about the ill-intentions of these dastard and coward actors, we discovered that other places where the same Rocana had billboards of other products were not touched and neither was the same “remove ads” notices placed on them.”

The APGA guber candidate therefore called on the state government and security authorities to begin investigation on the matter to avoid any further acts capable of disrupting public peace in the State.

But the Media Aide to Mr Umahi, Chooks Oko, in a reaction said the governor knows nothing of the allegations.

According to him, “the allegation is not only laughable but quite strange. How can every perceived negative act be always attributed to a man who does not sleep in his bid to leave a better Ebonyi?”

“For the avoidance of doubt, Governor Umahi does not have any hand in destroying anyone’s property, billboard inclusive.

“One would expect such reports to be made to appropriate government agencies with proof of payment of the relevant signage fees and the necessary approvals for the erection of billboards.

“We are in a society governed by laws. Let the complainants approach the agencies that gave them the right to mount the billboards and lay their complaints,” he said.