By EditorOctober 11, 2022No Comments2 Mins Read 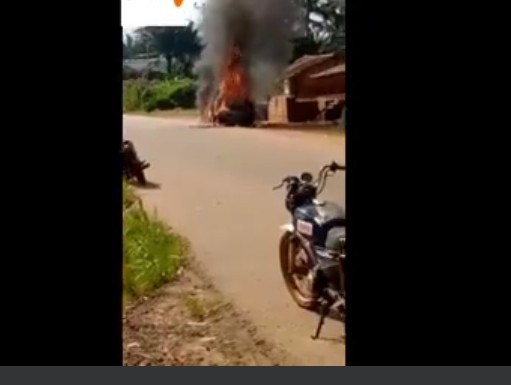 Gunmen on Tuesday allegedly attacked a black 350 Lexus car, set it ablaze and abducted the driver of the vehicle to an unknown destination in Akokwa, Ideato North council area of Imo State.

An eyewitness said the attack was carried out at about 12:54 pm, at Ohigiri junction, Akokwa in Imo.

According to him, “unknown gunmen this morning Tuesday came to our Ohigiri junction, Akokwa and attacked a man driving his 350 Lexus. They double-crossed the vehicle and forced the man to come down before they set the car ablaze.

“As I talk to you everybody in the junction closed shop and ran away back to their homes for safety.”

However, this is coming days after the same gunmen launched an attack at Arondiuzugo/Ikpeora/Akokwa/Okigwe Road in Imo State. They had shot two police officers after they had searched the vehicle for cash and guns. The same gunmen last weekend reportedly engaged in a gun battle with security operatives creating fears in communities.

As at the time of filing this report, the Imo State Police command was yet to respond to the incident.