Teni and the burden of half-hearted patriotism by Jude Eze

By EditorOctober 23, 2022No Comments7 Mins Read 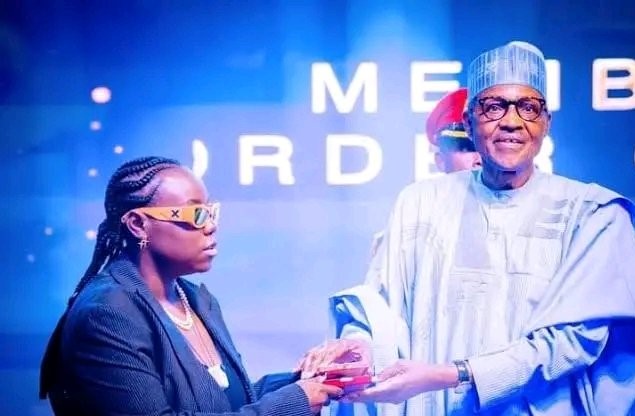 The event of Tuesday, 11th October, 2022, at the International Conference Centre Abuja, has kept current affairs  analysts busy weeks afterwards. It was the day and venue for conferment of varied grades of National Honours award to over 500 ‘deserving’ Nigerians (and some friends of Nigeria) by President Muhammadu Buhari. Considering the state of the nation with all indices of state failure staring on our faces, the event looked like stark insensitivity to our already-severed collective sensibility.

Four days earlier, on Friday, 7th October, the President had presented a comparatively worst national budget proposal to a joint section of the National Assembly – a budget draft that breached all known conventions of Nigeria’s financial framework. For the first time we witnessed a budget projected to run on the negative.

The budget violated the 2007 Fiscal Responsibility Act which stipulated that Deficit to GDP ratio should not exceed 3%. Buhari’s 2023 budget draft is gaping at 4.78% (due to humongous national debt servicing). The Act clearly states that: “aggregate expenditure and the aggregate amount appropriated by the National Assembly for each financial year shall not be more than the estimated aggregate revenue plus a deficit, not exceeding three per cent of the estimated GDP or any sustainable percentage as may be determined by the National Assembly for each financial year.”

And yet Mr. President was smiling to the cameras proudly issuing medals and sashes of honour to awardees, as if all is well with our country.

As he made his ‘triumphant’ entry into the venue that mid-morning, Dr Nasir Sani-Gwarzo, the Permanent Secretary, Ministry of Humanitarian Affairs, Disaster Management and Social Development, was releasing staggering statistics on the extent of damage the present preventable flood disaster is causing the country. It has now negatively impacted the lives of 1.4 million people and displaced 790,254.

Around 500 people have died and 1,546 injured as at that morning. These figures represented a geometrical increase from late September when the Federal Government reported that over 300 people had died and 100,000 were displaced by floods across Nigeria since February 2022.

Flooding has caused widespread damage to homes and livelihoods. As many as 44,099 houses have been partially damaged and 45,249 houses destroyed. As much as 70,566 hectares of farmland and crops have been destroyed and a further 76,168 hectares damaged, the Permanent Secretary, said.

Yet, Mr. President and his deputy were exchanging accolades for running the once “Giant Of Africa” aground. By now state of emergency should have been declared all over the affected areas, and rescuing victims and finding solutions should have trumped every other activity in Nigeria right now including electioneering campaigns.

Well, that’s what you get in a country with no value for human life, and where government have no understanding of the economic impact of its actions.

But that is not the berth of this discourse. It was set to analyse the seeming upset at the event – the much reported subtle protest from one of the awardees, Miss Teniola Apata, professionally known as Teni The Entertainer, a Nigerian singer, songwriter and entertainer.

During the award ceremony, Teni was seen to be the only recipient who failed to greet, or shake hands with the President when collecting her award. Her action generated a lot of controversies among Nigerians who either viewed her conduct as a total disrespect to the office and person of the President or as commendable to the spirit of activism.

But conversations should bother more on what ought to be the germane response to the event in the first place. Are Teni and his fellow entertainers like Burna Boy, and 2Face Idibia who use their songs to advocate for social justice supposed to honour the invitation at this dark period in our country’s history? Were they not offended by the October 20, 2020, Lekki massacre perpetrated under this regime? Were they not irked that the same government that ordered those triggers pulled was decorating their necks?

If Teni’s refusal to exchange formal pleasantry with the President was a show of activism then she was just exhibiting half-hearted patriotism. She ought to have boycotted the ceremony in the first place to pass the message more comprehensively.

In 2004, while Anambra State was thrown into political anarchy by a click of renegade political godfathers. Prof. Chinua Achebe was invited by Obasanjo-led government for a national honours award of Member of the Order of the Federal Republic (MFR). He turned it down as a protest to force government to correct the instability bedeviling the state and the country at large. At the time, Prof. Achebe said his decision was intended to serve as a “wake-up” call and he hoped that “change” would be achieved through protests.

Seven years later, in 2011, President Jonathan handed him similar invitation, this time, the Commander of the Order of the Federal Republic (CFR). Again, Achebe rejected it in vehement protest, saying that he was turning down the award because “the reasons for rejecting the offer when it was first made have not been addressed let alone solved. It is inappropriate to offer it again to me.”

The late Chief Gani Fawehinmi, a foremost human rights activist and lawyer, from Teni’s neighborhood in Lagos, rejected the Officer of the Order of the Federal Republic (OFR) conferred on him in 2008 by the Umaru Yar’Adua-led administration.

In this year’s edition, award-winning Nigerian author, Chimamanda Ngozi Adichie, rejected the offer. The renowned writer, it was gathered, declined the honour in private as she does not want undue publicity. Omawunmi Ogbe, the writer’s communication manager, confirmed the development to newsmen last week.

Ogbe said: “Adichie did not accept the award and, as such, did not attend the ceremony. She, however, did not want to create undue publicity around it, so her non-acceptance was conveyed privately.”

That’s patriotism and dispassionate advocacy for welfare of fatherland, which supersedes self glory. People had expected that  some of our music celebrities would seize the opportunity to advocate for a better leadership in Nigeria and not keep a blind eye to the unworkable situation of the country by collecting those awards and applauding the status quo.

The seeming rudeness displayed by Teni, and which many read to mean signal disapproval of the nation’s leadership stalemate is hypocritical. The best option is to toe the path of honour by declining the invitation.

Meanwhile, as the discussion was ongoing, she sent out an appreciation message via her Instagram page, commending President Buhari and his government for the award. And that settled it. What people called unruly attitude or sheer protest display by the Singer was nothing short of hasty oversight or white collar stage fright.

Across generations, the like of Achebe, Fawehinmi and Adichie’s pedigrees are rare, but regular critics like Chief Mike Ozhekhome SAN, and Teni are in high supply.

Soludo: From ‘solution’ to ‘dissolution’ by Jude Eze

Serena Williams: Lessons from a life of focus by Osita Chidoka