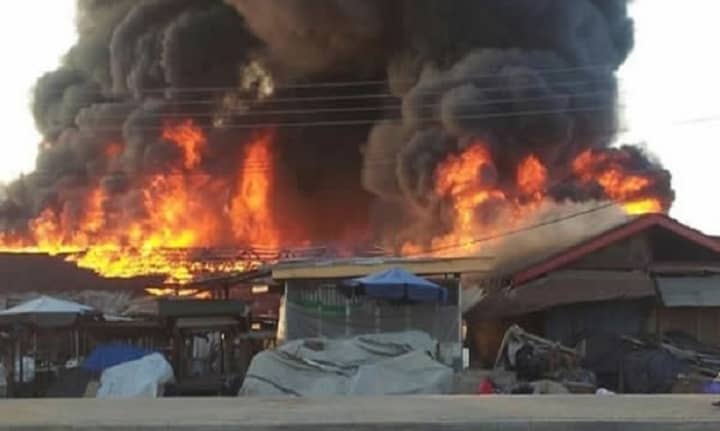 Goods worth millions of naira have been lost in an explosion that rocked Onitsha, the commercial city of Anambra State on Tuesday.

Reports have it that the explosion happened at the popular Ogbo Ogwu Market in Onitsha.

Sources said the explosion led to an inferno in the area, with over N850 million worth of goods destroyed in the process. It also said about four persons were feared dead, while 12 others sustained varying degrees of injuries

“The explosion occurred at about in the afternoon at the market, which led to stampede, and later fire. The four deaths were as a result of stampede as traders scampered for safety.

“Also the Council Chairman contacted the DPO Fegge, Rabiu Garuba, who deployed officers and men to the market to guarantee security of goods and other properties belonging to the traders,” the source said.

A traders who spoke to Ikengaonline, Mr Nweke Uchenna, said: “We were at our shops as usual when we heard a loud noise like a bomb blast and we saw tick smoke from some shops upstairs and everyone started running for safety.

“Then people started shouting for help and we saw people carrying bodies of people from those shops that were on fire and some were burnt badly while some seem to have been suffocated by the smoke and the stampede.

“We don’t know how much that have been lost to the fire but it can be estimated at N850 million to about N1 billion because the goods are strong chemical products that are highly inflammable,” he said.

When contacted, the Managing Director of the Anambra State Fire Service, Engr. Martin Agbili, confirmed the outbreak, but however said it affected a section of the Igbo Ogwu Market.

He said: “The casualty figure is not certain now, but our operatives led by DCP John Ogbodoaga are still there, and the situation has been brought under control.”