2023:Tinubu in Ebonyi, promises to dialogue with agitators

By EditorNovember 24, 2022No Comments3 Mins Read 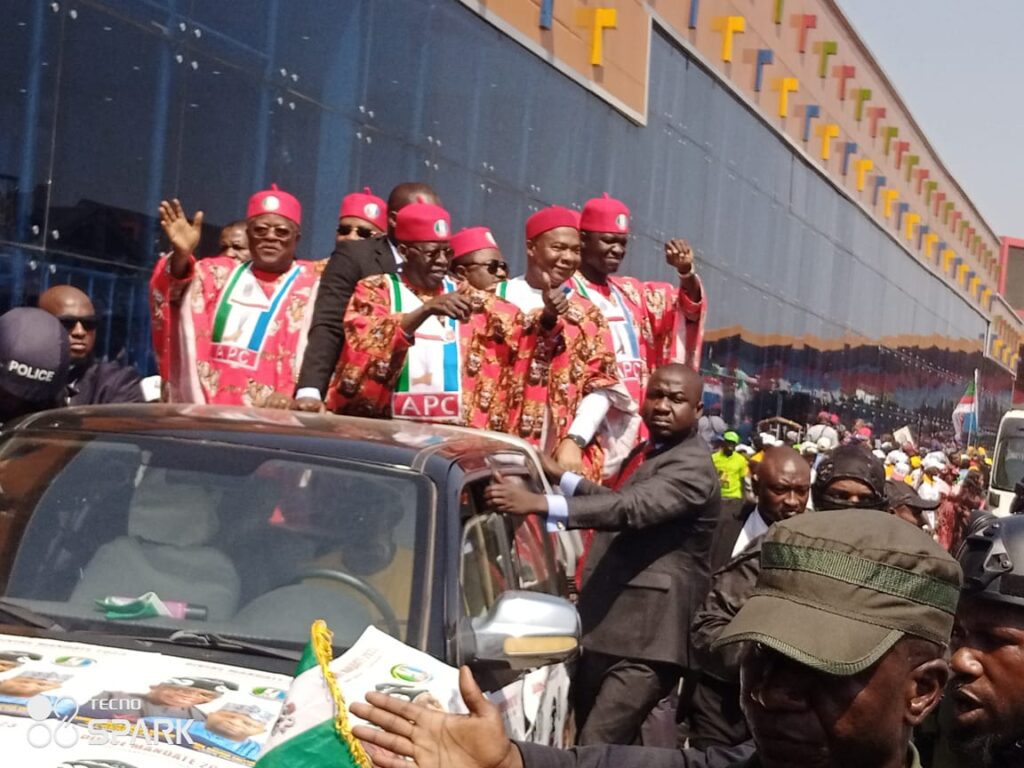 Presidential Candidate of the All Progressives Congress (APC), Asiwaju Bola Ahmed Tinubu, on Thursday, expressed his willingness to negotiate with all agitators in the country especially those in the South-East so as to end the spate of insecurity in the region and country.

This is as he noted that the South-East has the ability to become the Taiwan of Africa if properly harnessed.

He noted that the region possesses the human capital to be able to achieve this.

Addressing the mammoth crowd, Tinubu said what the South-East needed to achieve this is for government to create enabling environment for businesses to thrive in the region.

He said his government will build the necessary infrastructure like roads and railways while negotiating with agitators in the region to achieve peace and security.

He argued that negotiation is the best way for people to get their demands and complaints stemmed rather than resorting to violence.

Asiwaju Tinubu said if elected the President, his administration will invest massively in education.

“Education is the greatest weapon against poverty. We are going to get our children educated. We will reform the education sector,” he promised.

“We want peace, we will talk to all agitators. You can’t get your wishes by conflict but by sitting round the table to complain”

“For example, David Umahi said there is no dual carriage way from here to Enugu, there is need for railway to Calabar port and to link South-East, he didn’t use violence to ask for this but by sitting round the table to table them”

“You can get your challenges solved by electing visionary leaders to lead the crusade for development, progress and prosperity. In me, Bola Ahmed Tinubu, you will have that Leader,” he said.

He promised to put an end to estimated billings which has characterized the power sector.

“We don’t want to go backwards, we are progressives, we will move Nigeria forward. We will do the right thing. We will make South-East the Taiwan of Africa. We can do it.

The State Governor, David Umahi, said the state should not be dragged into any ethnic sentiment regarding the election adding that what the country needs is unity of purpose.

He noted that Ebonyi has prospered under APC which he noted has given the region live touching projects like the Second Niger Bridge and reconstruction of Enugu – Port Harcourt Highway.

He said Tinubu has a track record of excellence and raising of great leaders and should be supported to take the nation forward.

“He has raised people and always goes for the best. He has done it before in Lagos State and with our support he will do it again.”

Jigawa state Governor, Mohammed Badaru, said APC has done more for South-East than the PDP and deserves the vote of the people.

Imo State Governor, Hope Uzodimma said APC is taking over the South-East because he (Tinubu) is the best candidate for the presidency.

Kebbi State Governor, Abubakar Bugudu, said Umahi and Uzodimma mean well for the South-East and urged the people to listen to them.