No cause for alarm - Greg Ibe 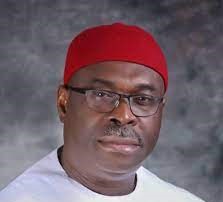 A Federal High Court sitting in Abuja, Thursday, nullified the governorship primary of the All Progressives Grand Alliance, APGA, in Abia State.

Presiding Judge, Justice Binta Nyako, who delivered the judgment in a suit filed by one of the governorship aspirants, Chief Chikwe Udensi, ordered a fresh primary within 14 days.

Meanwhile, the APGA governorship candidate, Professor Greg Ibe, has urged his teeming supporters and APGA members in the state not to panic over the judgment.

Professor Ibe who accused forces against the development of the state of conspiring against him, said he would nonetheless cross over the hurdle being put against his candidacy.

The Abuja court judgment is coming barely 24 hours after a federal high court in Umuahia, quashed a suit filed by another aspirant, Gen. Ijioma N. Ijioma, also seeking the nullification of the primary election, for lack of merit.

Udensi and Ijioma came third and fourth respectively in the May 29 primary won by Professor Ibe, while Etigwe Uwa, SAN, came second .

Professor Ibe in a statement by his Media Aide, Rev. Sleek Ogwo, said that his lawyers had appealed the judgment, adding that he had also secured a stay of execution.

He described the legal fireworks against his emergence as antics of the anti-democratic forces holding the state down.

The APGA governorship candidate said that Udensi and his sponsors would not be able to stop or prevail against the will of God, expressing hope that the appellate court would uphold his candidacy.

He also said that the inauguration of his Campaign Council scheduled for Friday, as well as campaigns would continue as scheduled.

“We shall cross this Red Sea. Our programme continues and our campaigns will go on as scheduled. There is no going back. We must salvage our state from the hands of those holding it down. Nobody will stop the New Abia that is about to be born.”

Professor Ibe said that Udensi deceived the court, insisting that the May 29  primary election of APGA was peaceful and supervised by the Independent National Electoral Commission, INEC.

“We thank the Judge for giving us the judgment that was not expected. He knows too well that INEC stamped all the delegate list for the election and INEC was the umpire.

“What Udensi presented was personal to him and he used it to deliver judgment against us. But there is no cause for alarm. We give thanks to God.

“Our teeming supporters and APGA members should not worry. We keep on moving. Our party  shall keep on getting stronger.

“We know what is happening with Udensi and his sponsors. But they shall all fail.”

Ibe said Abia must be rescued in 2023 irrespective of the antics of the enemies of progress using various tact to fight him.