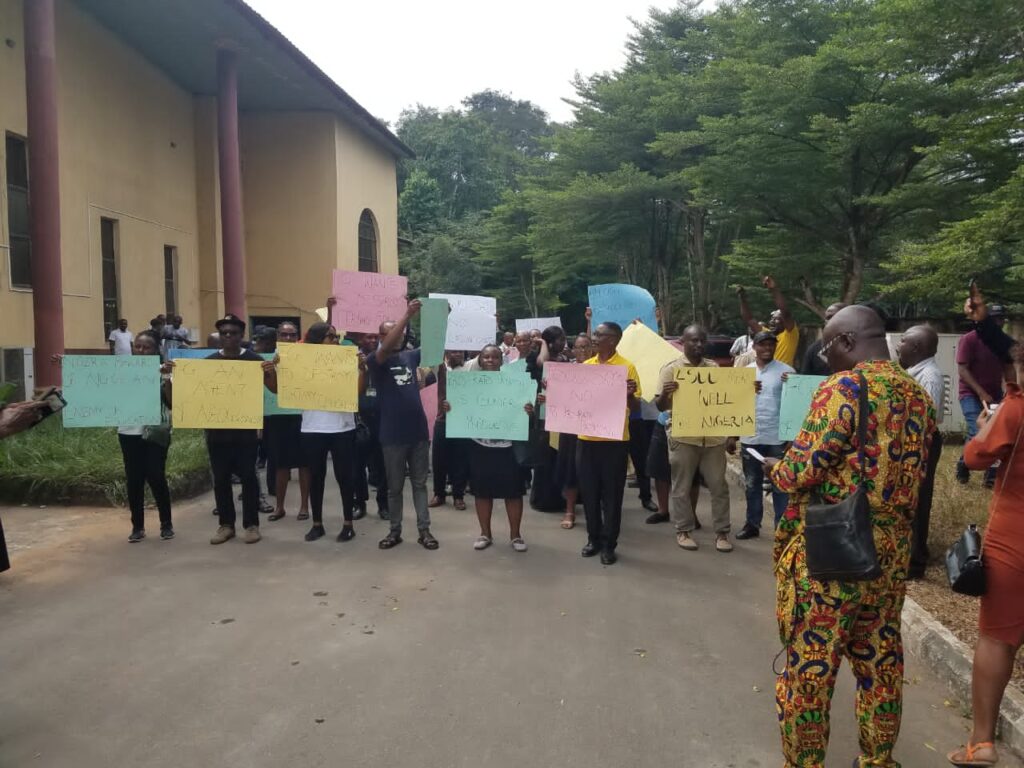 The Academic Staff Union of Universities (ASUU), has called for the immediate removal of the Minister for Labour and Productivity, accusing him of “divide and rule and  pro-rata payment of salaries.”

ASUU, further accused Ngige of paying politics with the demands of ASUU which led to the protracted strike that crippled the education sector.

The union which held its rally Thursday at the Michael Okpara University of Agriculture, Umudike, MOUAU, accused Ngige of “Divide and rule and  pro-rata payment of salaries.”

The lecturers who carried placards with various inscriptions marched round the campus chanting solidarity songs.

Some of the inscriptions read: “We are rejecting it;” “Nigerians beware of Ngige – enemy of education;” “Education is the bedrock of developing nation” and “On NIMI Briggs agreement we stand;” among others.

Addressing the rally, Chairman of ASUU, MOUAU, Professor Chike Ugwuene, expressed disappointment over the inability of the Minister to logically help resolve the lingering face-off between the union and the Federal Government.

Professor Ugwuene said that the Federal Government had no regard for lecturers, otherwise,  Government would have not refused to meet the union’s demands.

He regretted that even when the lecturers  suspended the strike and returned to the classroom,  Government reneged on in its own part of the agreement.

Professor Ugwuene said it was provocative for Government to pay half salary to lecturers thus, treating them as casual workers.

He said that ASUU had tolerated Government enough, and might have no option than to take stringent measures to drive home their agitation.

“Government has pushed ASUU members to the wall, and they might have no choice than to break the wall.”

He argued that since the lecturers were clearing the academic works suspended during the strike, Government’s refusal to pay for the months of the strike was hollow.

“When we came back, the government rewarded us  by paying  pro-rata as if we are casual workers. Government decided to reduce us.

“In MOUAU, we started with 2021/2022 examinations, but Government didn’t regard that but adopted ‘no work, no pay.’ We have shown patriotism enough, else we may begin  ‘no pay no work.’

Speaking at the rally, the National Chairman of ASUU, Comrade  Emmanuel Osodeke, told Government to stop toying with lecturers and the Education sector.

He urged Government to heed the demands of ASUU to save the education sector from total collapse.

Osodoke, however, said that ASUU had not been defeated as the “Federal Government has budgeted N470 billion for Nigerian universities.”

He, therefore, urged Government to respect all its agreements with ASUU, accusing the Federal Government of dragging its feet on education.

Earlier, the Zonal Coordinator, ASUU Owerri Zone, Comrade  Uzo Onyebinama, said that Government and not ASUU should be held responsible if anything happened to the education sector

“We go borrowing and we are living by borrowing. We are not labourers, but the struggle continues,” he said.

In their separate lectures,  Prof. Irene Ejeh and Prof. C. O. Offor urged the Federal Government to do all it can to improve the conditions of universities in the country.