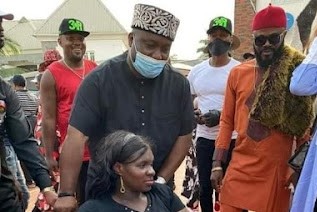 The intervention is in line with the 2022 World Disability Day tagged: “Transformative Solutions for Inclusive Development: The Role of Innovation in Fuelling an Accessible and Equitable World.” The event is celebrated December 3 of every year.

Speaking at the event, Comrade Amobi Okonkwo, a Senior Special Adviser to the Senator on People with Needs, said that those living with sickle cell anaemia were also not left behind in the Senator’s largesse. 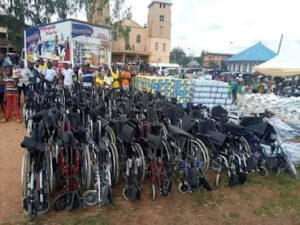 “Senator Ubah in his good heart has also extended his benevolence to almost all the homes for the disables and vulnerable people both public, mission and private sectors in  Anambra South Senatorial District.”

Mr. Okonkwo said that the complex and interconnected crises facing humanity today in Anambra South includes the shock resulting from the insecurity in the state, especially in Anambra South which has posed more concern to Senator Ifeanyi Ubah as people in vulnerable situations  are the most affected.

Comrade Okonkwo stated that Ubah has  promised to use the instrument of legislature to collaboratively find innovative solutions for persons with disabilities to make the state a more accessible and equitable place.

“It is also pertinent to note that Senator Ubah have successfully facilitated employment of persons with disabilities in both public and private sectors and has promised to do more through our support towards his political movements,” he noted.

The annual observance of the International Day of Persons with Disabilities was proclaimed in 1992 by the United Nation’s General Assembly resolution 47/3 aimed at  promoting an understanding of disability issues and mobilise support for dignity, rights and well-being of persons with disabilities in the world.