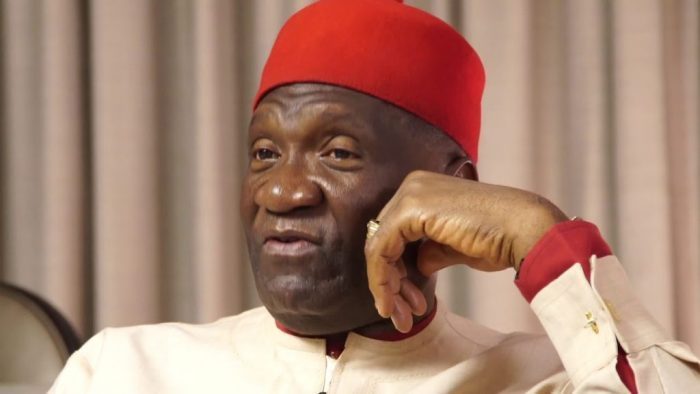 On Sunday, December 11, the Coal City of Enugu will stand still, in reverence to one of her most illustrious sons and a quintessential Nigerian statesman. When you start to interrogate the idea that a maverick like former President Olusegun Obasanjo is the chairman and the fiery Dr. Hakeem Baba-Ahmed of Northern Elders Forum is the keynote speaker at this event, you will come close to properly situating the place in history where the man at the center of it all belongs. Perhaps, more so when as the former President-General of Ohanaeze, the apex Igbo socio-cultural body, it is easy to be misconstrued as one whose worldview gravitates towards a provincial agenda. What is not in doubt, however, is that Chief Nwodo wears his Igboness as a badge of honour and is quite unapologetic about it. But the big masquerade is no less a Nigerian than he is Nwa Afo Igbo.

John Ogbonnia Ugwuamakofia Nwodo, was born on December 11, 1952, into the Nwodo royal family of Ukehe, Igbo Etiti Local Council Area of Enugu State. Young Nwodo came into the world the same year his late father and patriarch of the famed Nwodo political dynasty, joined partisan politics. As we are often reminded of the unseen hands of God in the affairs of man, this too would turn out not to be a mere coincidence.

His educational journey started out at St. Patrick’s School, Iva Valley, to Holy Ghost Primary School and then College of Immaculate Conception (CIC), all in Enugu. Having passed his ordinary levels in flying colors, he was offered admission to Nigeria’s premier institution of higher learning, the University of Ibadan where he studied Economics. From Ibadan, he proceeded to London School of Economics and Political Science and later to the University of London where he obtained a degree in Law. Upon return, he was called to the Nigerian bar.

Many years later, he would lecture Human Rights at the Enugu State University of Technology (ESUT) Faculty of Law and had a brief stint in the public sector as the Chairman, Urban Development Bank of Nigeria, among few others. But it was in politics that he rose like a meteor and shone bright like diamond.

Nwodo cut his political teeth as the President, Students Union Government at the University of Ibadan, a rarity for an Igbo, even by today’s standard. His political journey took off like a rocket ship thereafter. Of course, during his formative years, he was the Deputy Senior Prefect at CIC and also served as a senior Sacristan in the same intuition.

Nnia Nwodo was a two-time Minister of the Federal Republic of Nigeria with portfolios in Aviation, as well as Information and Culture. With each office he occupied, he brought with him uncommon wisdom and lots of gravitas. He would be remembered as the human face of General Abdulsalami Abubakar military regime, where he was seen touring media houses across the length and breadth of the country, explaining the government’s policy positions. He was reputed to have played a key role in helping his principal successfully usher in a return to civil rule in 1999.

As the President-General of Ohanaeze, Chief Nwodo led the effort to reposition it to be of reckoning, the organization having faced some sought of identity crisis before him. He also led Ohanaeze in collaboration with Afenifere and Pan Niger Delta Forum (PANDEF) to demand for restructuring of Nigeria to become a true Federal Republic. The fact that today, both groups and their leaders are standing firm in solidarity to elect a Nigerian President of Igbo extraction is a testament to his visionary leadership; the one that is eagle-eyed and knows that to achieve most things great, we simply can’t go it alone.

But I am sure that even Chief Nwodo himself would agree that leading Ndigbo, a people with such an egalitarian mindset and a rabid passion on issues, has its own challenges. His stewardship no doubt was very rewarding but could hardly be described as a walk in the park. Thankfully, throughout the course of his rich and eventful life, leadership has always come naturally and he is never the one to shirk responsibility when duty calls.

Young Igbos who today feel unwanted and short-changed by Nigeria, the only country they can call their own, want out of the union and are impatient with the path proposed by Nwodo and his group. As someone who actually fought in the brutal Nigerian-Biafran civil war where an estimated three million of his people lost their lives, he clearly understands the issues at stake. Nwodo maintained that tact is not weakness, spoke up against militancy and firmly stood his ground. He remained hard-headed and refused to be brow-beaten into submission. Such a principled stand, however, did come at a great personal cost with sustained ad hominem attacks lobbed at him by those who in addition, relentlessly maligned his character and called him a Fulani stooge. Looking back and going by the turn of events, we might as well add the prophet to his highly decorated hat.

As President of Ohanaeze, Nwodo was without doubt, a tough act to follow. Fortunately, Ndigbo got lucky this time that another level head and steady hand showed up when we were so desperate to have the right mind fill the huge void he left. Professor George Obiozor thus far has led the organization well and conducted its affairs creditably. He is quite aware of the weight of his position, weighs in without fear when he should and most importantly chooses to remain silent when occasion demands.

One could author a book chronicling the life journey of Nwodo, an icon and his myriad of accomplishments, without even scratching it on the surface. But the Igbos are quick to remind us that the story of a great mind surely cannot be told in a hurry.

Welcome to the 7th floor Chief. May your dream of a better Nigeria where all the sub-nationalities become an integral part of a functional whole materialise.