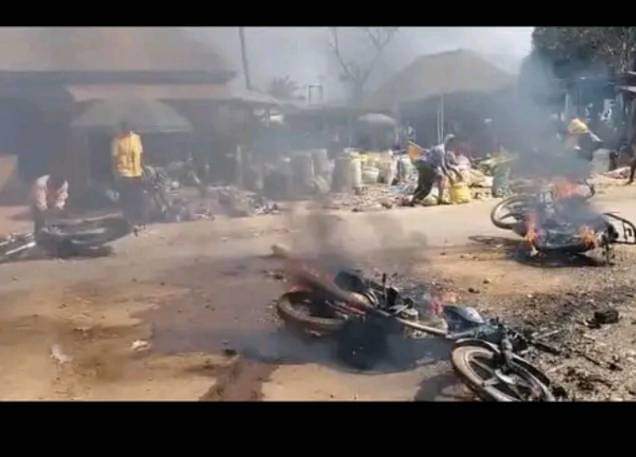 Gunmen enforcing the five-day sit-at-home order declared by a Biafra separatist have set ablaze a vehicle and some motorcycles at Nwakpu market in Ndufu Alike in Ikwo Local Government Area of Ebonyi State.

Sources in the area said the gunmen who were putting on all black attire with a hood stormed the market which is few metres away from the state Deputy Governor’s House and Alex Ekwueme Federal University and shot sporadically.

They ordered traders and shop owners to vacate the Market and observe the sit-at-home.

One person said to be the driver of a vehicle set ablaze by the suspected terrorists was shot on the hip as he attempted to put out the fire.

The development disrupted activities in and around the market as traders and passersby fled the scene.

He said the attackers are not members of the Indigenous people of Biafra ( IPOB) but mere hoodlums who invaded the Nwakpu market to rob traders of their belongings.

He said: “What happened was that some boys invaded the Nwakpu market to rob traders. They are not members of IPOB. This is because the gunmen came into the market with locally-made pistols.

“Ebubeagu is on ground to arrest those boys because we know the clothes they (gunmen) are wearing and so, we are after them.

“We are on track to get them. We are putting on our touch light on them to arrest them. From now till tomorrow, we will apprehend them,” he stated.

Police spokesperson in the State, Chris Anyanwu, said he was not aware of the incident and promised to get details.

The five-day sit-at-home was declared by one Simon Ekpa who is based in Finland.

However, the Indigenous People of Biafra (IPOB), dissociated itself from the sit-at-home so also did its Leader, Nnamdi Kanu.

The sit-at-home was ignored by residents of Ebonyi State on Friday when it began till Monday when reports of gunmen invading the capital city forced residents to stay indoors.

The situation continued on Wednesday as residents stayed indoors with most shops in the city under lock.

The International Market recorded low turnout of traders and customers while there was skeletal intra-city transport service.