By EditorDecember 22, 2022No Comments2 Mins Read 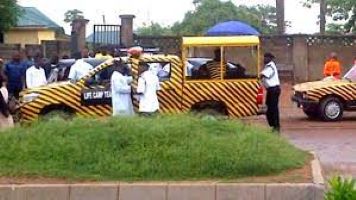 The Court delivering judgment in a fundamental rights suit instituted by Barr. John Nwobodo against the Permanent Secretary, Ministry of Transport and 3 vehicle inspection officers, granted the applicant’s reliefs as follows:

“An order enforcing the applicant’s fundamental right to freedom of movement and ownership and possession of moveable property as guaranteed under sections 41(1) and 44(1)(a) of the Constitution of the Federal Republic of Nigeria 1999 (as amended).

“A Declaration that the impoundment of the applicant’s motor vehicle without an enabling law establishing Vehicle Inspection Officers or authorizing Vehicle Inspection Officers to enforce the Road Traffic Law, cap. 137, Volume V, Revised Laws of Enugu State 2004 is illegal, unlawful and constituted an infringement of the Applicant’s right to freedom of movement and ownership and possession of moveable property.

“A Declaration that the Vehicle Inspection Officers have no legal authority to be on the public highway of Enugu State in the guise of enforcing Vehicle License, Driver’s License, Insurance Certificate, Road-worthiness Certificate or any other vehicle particulars for that matter in the absence of any enabling law.

“An order of perpetual injunction restraining the Vehicle Inspection Officers from being on the public highway of Enugu State in relation to enforcement of motor vehicle particulars under the Road Traffic Law, cap. 137, Volume V, Revised Laws of Enugu State 2004.

“An order directing the Respondents to repair or replace with quality spare parts the damaged rear traffic indicator, front wheel but and rear mirror or pay the sum of N100,000.00 instead.

“A Declaration that the Respondents jointly and severally are liable to pay damages for breach of the fundamental rights of the Applicant.

“An order for general and exemplary damages in the sum of N400,000.00 (Four Hundred Thousand Naira) against the Respondents jointly and severally and in favour of the Applicant for infringement of his fundamental right to freedom of movement and ownership of moveable property.”

The Respondents in the suit are the Permanent Secretary, Ministry of Transport; Mr. H Onu, Mr Okeh and Mr. K.E.Odoh, who are Vehicle Inspection Officers.