JONAPWD calls for improved welfare for PWDs in Anambra

By EditorDecember 22, 2022No Comments3 Mins Read 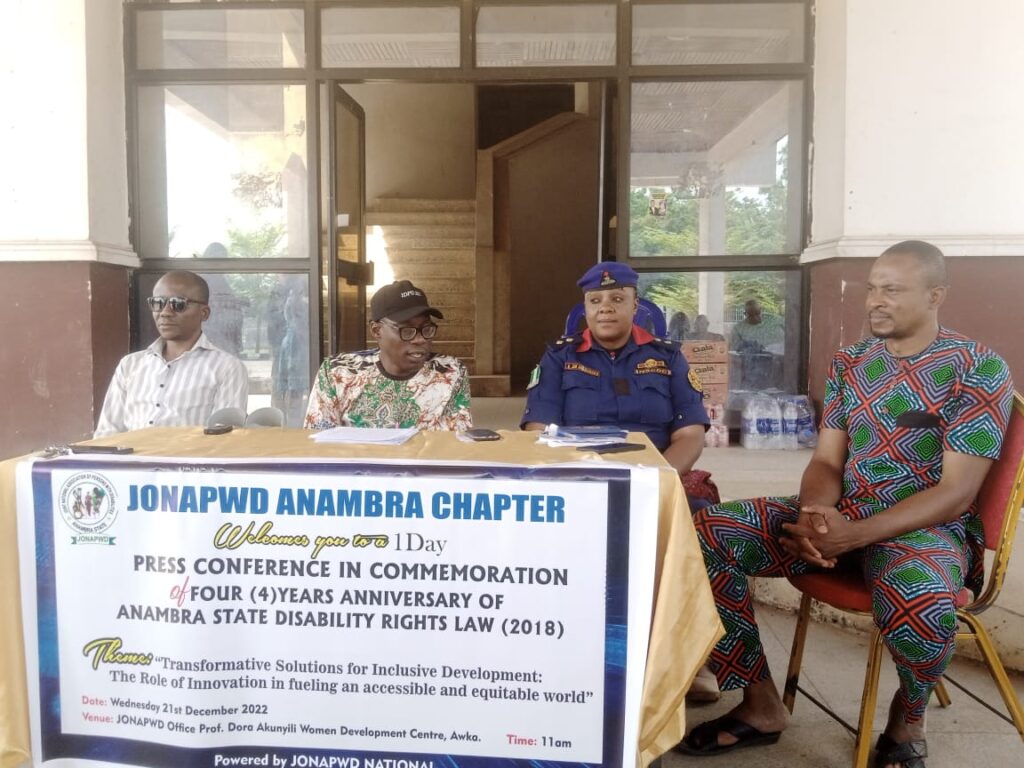 The Joint National Association of Persons with Disabilities (JONAPWD) has called for improved welfare of its members in Anambra State.

The body made the call, Wednesday, in Awka, during a press briefing it held in commemoration of her four (4) years anniversary of Anambra Disability Rights Law. The law was enacted in the state in 2018.

In his speech, Anambra JONAPWD Chairman, Comrade Ugochukwu Okeke, said the essence of the anniversary was to draw the attention of the public, government, and major stakeholders and remind them of the conditions affecting the disabilities community and the need to protect the rights of PWDs in the state.

Comrade Okeke who once again commended the state government’s enactment of the Disabilities rights law said it has paved the way for the elevation of the PWDs’ interests in the state.

According to him, the law provides a platform for the disabilities community to enjoy their rights which have come through the construction of mobile ramps in various parts of the state, the appointment of a Disability Desk Officer at the National Human Rights Commission, support from Faith-based Organisations and Civil Societies Organisations to adapt access to PWDs, as well as the increased employment opportunities in various levels of government, amongst others.

Comrade Okeke decried that despite the existence of the Law, Persons with Disabilities are still marginalised in the state, noting the continued negative and lackadaisical attitude of the public towards PWDs, lack of sign language teachers, inaccessible roads, marriage discrimination, and poor attitude of government functionaries towards JONAPWD members in the state.

He urged the government to consider reactivating the State Disability Rights Commission to be more effective in its tasks, noting that the community of disabilities desires employment of its members in the state civil service.

Okeke appealed for government intervention by way of providing social protection programmes, housing schemes, scholarships, and free healthcare for the disabled community. He further called for the construction of ramps at the utility hall of Professor Dora Akunyili Women Development Centre, Dr. Alex Ekwueme Square as well as providing the needed mobility aid allowance and special skill acquisition programmes for the PWDs.

While fielding questions, Okeke appealed that PWDs should be given opportunity to represent society at least at the ward level.

“We have to mobilise our members to take proactive steps to vote in the coming elections. We believe this will resolve certain issues with regards to active participation in politics,” he said.

In a remark, NSCDC, Desk Officer, ASC1, Amaka Anadumaka, said the agency has the duty to protect the rights of PWDs and admonished the JONAPWD leadership in Anambra to exercise continuous effort to notify the security agency of any threat to its members.

Also, Amobi Nwagu, in a vote of thanks appealed for the intervention of the media to ensure the widespread coverage of the affairs of the PWDs.