By EditorDecember 24, 2022No Comments4 Mins Read 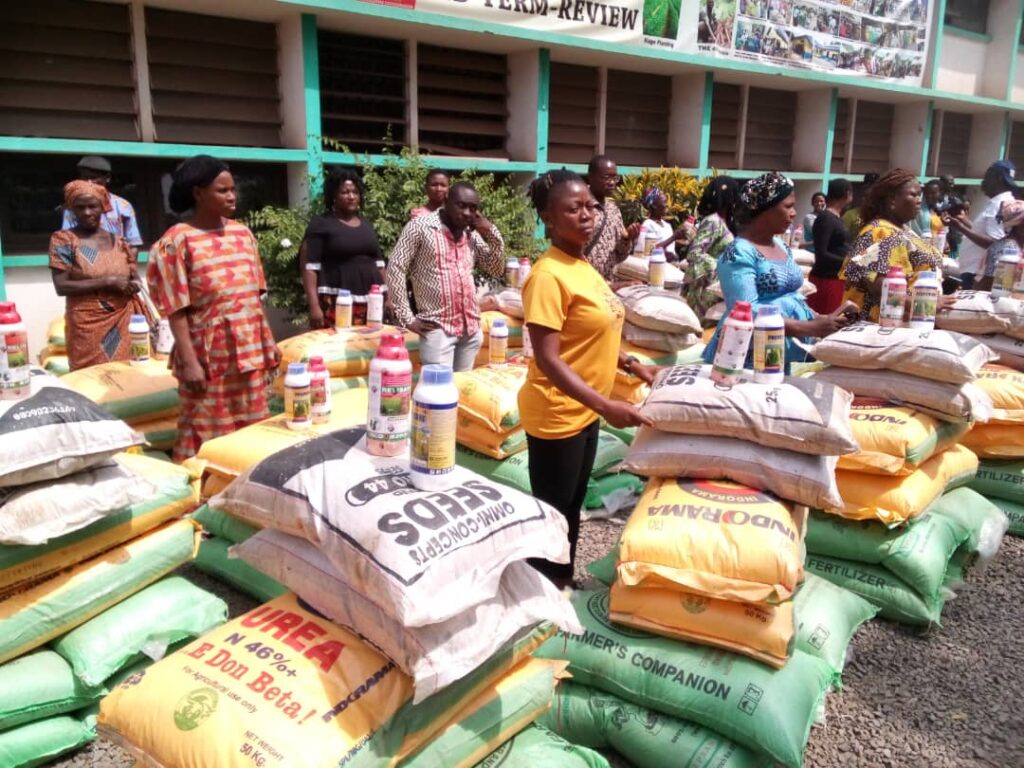 The Federal Government, in collaboration with the International Fund for Agricultural Development-Value Chain Development Programme (IFAD-VCDP), has distributed farm inputs worth millions of naira to 94 rural farmers in Enugu State.

The free agro-inputs were distributed at the IFAD-VCDP office in Enugu to cushion the effect of 2022 flooding that ravaged some parts of the state.

Some of the items given to the farmers include bags of Rice Seeds, Urea and NPK Fertilisers, Water Pump and Herbicides of selective and non-selective.

The National Programme Coordinator of IFAD, Dr Fatima Aliyu, said IFAD was aware of the impact of 2022 flooding on farmers and decided to help them with some farm inputs to cushion the effect.

According to her, IFAD noted that most of the farmlands were flooded and farmers lost what they planted, making their effort a waste.

“So, IFAD in its magnanimity saw the need to support you to plough back your farm activities,” she said.

Others are 3.7 metric tonnes of rice seeds and 48 Eater Pumps.

She said, “It is a grant, not inputs that you are expected to pay matching grant but completely free for those selected.

“They sent us a long list but only 94 among you were selected. So, consider it a great privilege and make good use of the inputs.”

Aliyu further said: “We expect that the moment you take delivery of these inputs, you go and do the needful.

“First you raise your nursery and prepare a farmland, after three weeks, you start transplanting and within next three months, you harvest your rice,” he advised IFAD-VCDP farmers.

She commended Enugu State Government for supporting IFAD-VCDP farmers in the state by paying the counterpart funds.

Speaking, Gov. Ifeanyi Ugwuanyi said that farmers in the state have reasons to be happy as IFAD was greatly touching their lives.

Ugwuanyi, represented by the Commissioner for Agriculture and Natural Resources, Mr Mathew Idu, said Enugu Government would continue to support farmers in the state.

“What the donor agencies are doing is to teach us how best to do it and it is our prayer when they exit, we will continue to do what they have taught us and do it even better,” he said.

He warned the beneficiaries to desist from selling the inputs given to them but rather make judicious use of them to better their lives and the state in general.

The Programme Manager, Enugu State Agricultural Development Programme (ENADEP), Dr Ogbonna Onyeisi, noted that, what flood did to farmers in the country should be addressed to ensure food security.

While urging the farmers in the state to be patient, Onyeisi stressed that security challenge like herdsmen attack would one day be over.

“If we want food security, agriculture to contribute to national development and secure farmers, something needs to be done urgently to tackle challenges facing farmers,” he said.

The State Programme Coordinator, IFAD/VCDP, Dr Edward Isiwu, said each of the 94 selected farmers would go home with four bags of NPK fertilizers, two bags of Urea, 40kg of seed rice and one each of selective and non-selective herbicides.

He noted that IFAD had early this year, distributed free farm inputs to 439 IFAD/VCDP farmers in the state to cushion the effect of COVID-19 pandemic.

Isiwu explained that the idea of the programme was to cushion the devastating effect of flood to farmers in the state and help them recoup their losses.

Thanking IFAD on behalf of other farmers, Mrs Eveliyn Nwaru, said IFAD/VCDP was different from other agricultural programmes in the state, stressing that they were helpful and organised.