By EditorDecember 29, 2022No Comments3 Mins Read 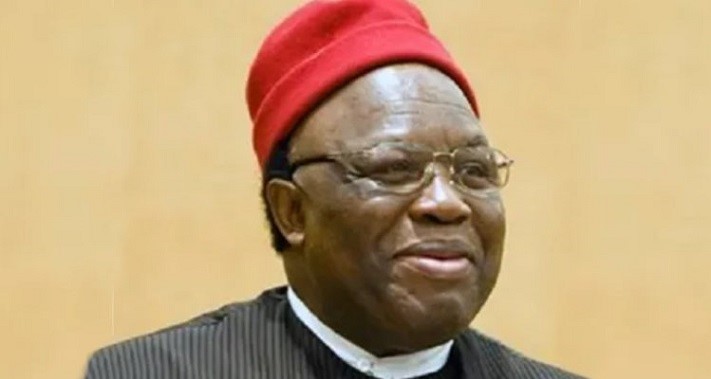 Governor Okezie Ikpeazu has expressed sadness over the death of the President General of Ohanaeze Ndigbo, Ambassador George Obiozor.

Ikpeazu in a statement by his Chief Press Secretary, Mr Onyebuchi Ememanka, said the demise of the former diplomat was a huge loss to Ndigbo.

This is as Senator Mao Ohuabunwa has described Ambassador Obiozor’s death as a colossal loss to Ndigbo.

The former Leader ECOWAS Parliament who spoke with Ikengaonline said the late Obiozor was a personal friend and a colossus.

“I flew with him in the aircraft few weeks ago and we discussed issues regarding Igbo interest. He had a very big programme for Ndigbo.

“He was an enigma and big asset to Ndigbo. We will miss him dearly,” Senator Ohuabunwa lamented.

Similarly, Gov. Ikpeazu described  Obiozor as “a ranking member of the global academic community, a world acclaimed Professor of International Relations, Diplomat of the finest grade, Nigeria’s former Ambassador to the United States of America and President General of Ohaneze Ndigbo Worldwide.”

He said the death of  Obiozor “has robbed Igboland of one of her most illustrious sons.”

The statement further read: “He was clearly one of our most powerful men at the global diplomatic level. Our decision to support his emergence as President General of Ohaneze Ndigbo Worldwide was based squarely on his pedigree and integrity. His death is even more painful coming at a time like this when the Igbo nation still grapples with issues around leadership and our place in a united Nigeria.”

“Professor Obiozor left imperishable legacies and indelible footprints on the sands of time. He will be sorely missed. We are consoled by the fact that his place in our history is assured.”

Ikpeazu condoled with members of Obiozor’s family, the people and Government  of Imo State, and the entire Igbo nation over the loss.

Professor Madubuike who said the late Obiozor was very close to him, added the he was still in shock over the ex-Ambassador’s death.

“I’m missing a great friend whom I knew since 1960s. In the late 60s, we met in the US when he came to do his Postgraduate Degree from Geneva. We met at the African Studies Association, and we had bonded together.

“He was a very vivacious intellectual, an excellent conversationist,  a lover of his people, and a man of great ideas. We got on well. We came back to this country almost at the same time at the end of the war.

“I knew him up to his family unit and we have been good friends working together in different spheres. He was a good Igbo man and we miss him greatly. I haven’t recovered from the shock.”