Obi at Chatham House rekindles hope for a new Nigeria 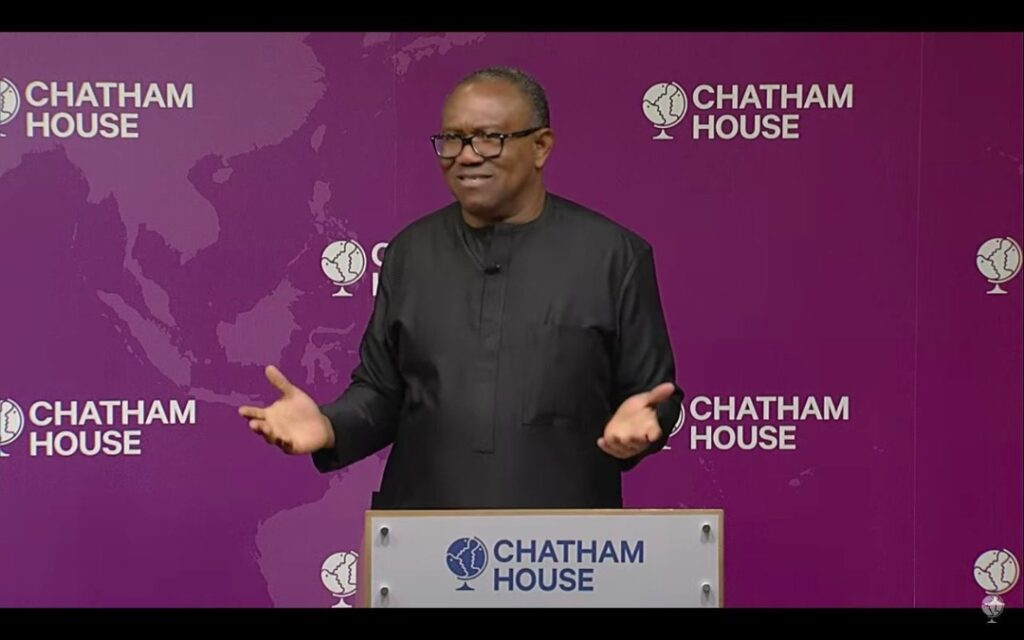 Presidential candidate of Labour Party, Peter Obi, has rekindled hope for a new Nigeria, which will be investors-friendly and a country where citizens will proudly flaunt their green passports.

Obi who spoke Monday at the Chatham House in London, regretted that poor leadership has been the greatest bane of the Nation as iconic Nigerian writer, Chinua Achebe, articulated decades ago and promised to provide the exemplary leadership needed to turn the country around if elected in February.

The Labour Party presidential hopeful promised that if elected, he would fight corruption to ensure that Nigeria becomes a country where citizens are proud to hold their passports and foreign investments thrive.

“We will fight and stop corruption. The first thing about stopping corruption is yourself, if you’re not involved, your wife, family is not involved, those around you are not involved, then you will reduce it by over 50 per cent. We are committed, we can’t disappoint these youths, we must build a new Nigeria.

“Investors will come back, those who left and those who are leaving will come back, we want to bring them back. Nigerians are prepared to come back if they can find that they have a country to go back to. This green passport, Nigerians must be proud to use it again,” he said.

The Labour Party presidential candidate decried the poor economic acumen of the President Muhammadu Buhari-led administration, regretting that Nigeria’s debt profile has soared uncontrollably since Buhari took over the reins of power.

The astronomical increase in debt, Obi said, was due to borrowing for consumption instead of for production.

Obi who was Governor of Anambra State for eight years, said that the entire money so far borrowed by the country had gone to waste.

Admitting that borrowing is essential for any economy to be quickened, Obi said that monies borrowed must be put into the development of the economy and invested into production.

“Japan is owing 230 per cent of their GDP but they invested the money to save their economy and even with that, Japan is still the largest holder of the US treasuries, so there’s something they can fall back on. So borrowing is not wrong.

“But what has happened is that when you borrow for consumption, you have a crisis. Nigeria in 2015 had a per capita income of $2,500, we were owing about N15tn. Today, with central bank’s ways and means, we are owing about N75tn, so we have grown that debt profile by over 400 per cent. That means that the money we borrowed was thrown away.”