We’ll return Enugu to past glory if elected – Edeoga

By EditorJanuary 22, 2023No Comments3 Mins Read 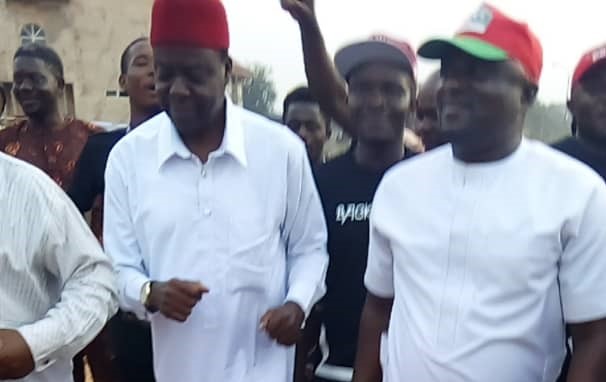 The Governorship candidate of Labour Party (LP) for Enugu State,  Hon. Chijioke Edeoga has said that the LP government would restore the lost glory of the State if elected.

He said this at Opi in Nsukka Local Government Area when he received over 500 decampees from the Peoples Democratic Party (PDP) to the Labour Party.

Edeoga said he will run an all inclusive administration to ensure that the best hands were appointed into the government for optimal result.

“I will redefine governance in Enugu State. When we come to power, by His grace, we will ensure that Enugu returns to its past glory.

“I will ensure that democracy dividends are spread across all the nooks and crannies of the state if voted into power,” he said.

Also speaking, the State Chairman of the party, Barr. Casmir Agbo, assured them of fair play.

He said that the decampees came at the right time when every well-meaning citizen of the State is joining forces to oust the ruling PDP-led government.

He assured the decampees of equal membership in the party irrespective of when they joined and further promised them that their loyalty and support would be rewarded.

On his part, the Labour Party Senatorial Candidate for Enugu North, Barr. Okey Ezea, used the opportunity to counsel the crowd of LP supporters on the dos and don’ts during the voting process.

He further urged the crowd to disregard the antics of the ruling party that they will create more autonomous communities.

“He is simply using the creation of autonomous communities as a political strategy to garner votes for his selfish and ambition to the senate,” he said.

Speaking on behalf of the decampees, Hon. Onyeke Chineme, decried the ruling party’s resort to threat, intimidation, lies and propaganda to its ineptitude and total failure.

He further assured the party that they will do everything possible to deliver Opi to Labour Party.

He noted that the PDP-led government lacks what it takes to deliver democracy dividends that would alleviate the plights of the suffering masses to the rural dwellers.

Similarly, Hon. Benjamin Okenyi, another decampee, said that they dumped PDP over leadership failure “and the inability of the PDP-led government to provide security to the people,” Okenyi said.

He promised to mobilise massively for the Labour Party ahead of the general election.

“As a grassroots mobiliser, I shall  deploy my networks to deliver Opi to Labour Party,” he said.

Some of the notable decampees include Hon. Chineme Onyeke, Chief Joel Ezeugwu and Chief, Godwin Agbo among others.