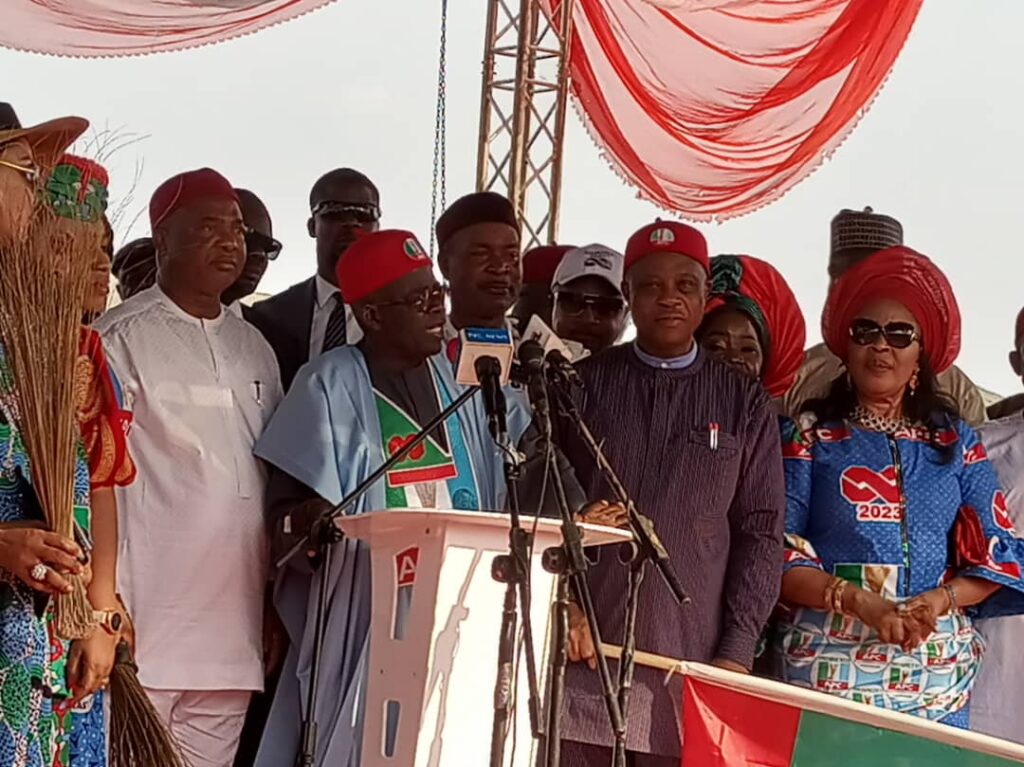 Conspicuously absent also were the Chairman of South-East Governors Forum and strong man of the APC in the zone, Gov. Dave Umahi, as well as a Board of Trustees, BoT, member of the party in the state, Prince Benjamin Apugo.

No reasons were offered for the absence of the APC chieftains at the rally held at the Umuahia Township Stadium.

Meanwhile, Tinubu has promised that his emergence as Nigeria’s President, would end the frustrations of Nigerian youths.

The  APC presidential candidate who made the promise while speaking at the rally,  promised to create job opportunities for youths if voted into power.

Tinubu also promised to invest in the education sector saying education is the bedrock of any society.

According to him: “I want to tell our youths that your frustrations are over. You will no longer spend eight years for a four-year course.”

Tinubu  urged Ndigbo to vote for APC and stop being in the opposition if the tribe desired to be integrated into the power arrangement of the country.

He also  promised to inject federal resources to develop Aba into a major economic hub in the country but said Abians must deliver APC in the forthcoming polls.

He called on APC supporters to protect their votes after casting their ballots.

“After voting, stay behind and protect your votes. Just vote for broom, others are like lizards and cockroaches which you will use your broom to sweep away.”

Meanwhile, Tinubu has appealed to the factional governorship candidate of the APC in Abia, Dr Ogah, to withdraw his court suit and meet him for settlement.

He promised to settle the dispute between him and Emenike in the overall interest of the party.

“Emenike now has the APC ticket. The other one is my friend and partner and member of our party.

“Uche Ogah please stop all court actions. Come and see me. Come home let’s discuss this matter in our bedroom.

“We are the politicians. We will put the party together. We follow the footsteps of our fathers. Why are you taking me to the third party? Please Uche, come home.”

Speaking at the rally, the Abia APC governorship candidate, High Chief Ikechi Emenike, said that APC was determined to claim the state at the polls.

He urged Abians to vote out the ruling Peoples Democratic Party, PDP, which it accused of ruining the state.

“We must rescue Abia State before we can rebuild it. APC is solidly on ground,” he said.

Emenike promised to end the era of salary and pension arrears if voted into power.

He also promised to build a new Abia if given the opportunity to preside over the affairs of the state.

In his remarks,  Gov. Hope Uzodinma of Imo State, called on APC members in Abia to be united if they must take over the state.

Meanwhile, the APC flag was formally presented to Emenike by the National Chairman of APC, Senator Abdullahi Adamu, represented by Enukwu.