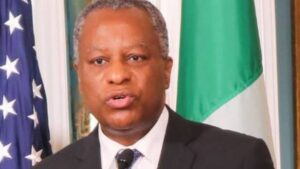 The Minister of Foreign Affairs, Mr Geoffrey Onyeama says the Federal Government has not contemplated imposing sanctions on Russia following its invasion of Ukraine.

Onyeama disclosed this on Wednesday in a statement by his Special Assistant (Media), Mrs Sarah Sanda and made available to Ikengaonline in Enugu.

Recall that an online publication had quoted Onyeama to have said that Nigeria was ready to impose sanctions on Russia for invading Ukraine.

However, the minister described such statement credited to him as false and misrepresented.

“The minister clearly said”, ‘we would act in the framework of the United Nations and if there was a UN Resolution, we would be obliged but there would not be because Russia has a veto power’.

Read the statement below: 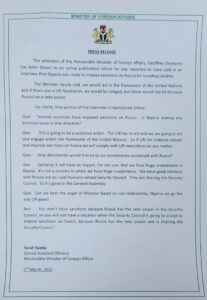