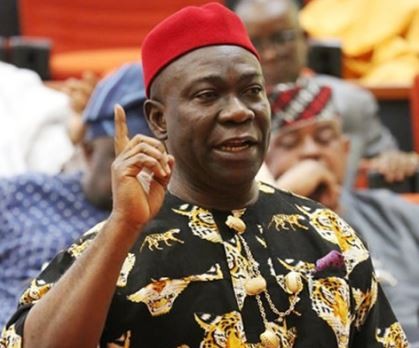 If you have been in company of late, you would have met one, two or three opinions about the coming Enugu governorship election.  And one thing would have featured prominently:  the tendency to bring Ike Ekweremadu, former deputy president of the Nigerian Senate and speaker of the ECOWAS parliament into the discussion. I hardly know Ike. He had briefly lectured in the University of Nigeria where I studied and we were proud, while I was there, that one of our own had climbed so high.  He visited the university on one occasion and we sat and listened with pride. He would later announce a state-wide scholarship or bursary scheme. I expended my money to go to Independence Layout where I dropped an application—to try my luck– as the phrase ran. Nobody got back to me. And I did not meet Ike again.

To start, this is a dispassionate analysis and should not be mistaken for the endorsement of any candidate. I have not made up my mind on who gets my “one vote” until the alternatives are fully paraded. Ike’s declaration of interest, to strengthen this point, was underwhelming, just to avoid calling it altogether disappointing. He failed, quite sadly, to notice the most useful arrow in his quiver.

Back to the gist, some five years later or more, Ike is back in the political consciousness of my own people, now, not as a perpetual senator which he appeared to be but as one of the most considered candidates for the coming governorship election. Opinion is heavily divided as to his chances. Some shoot any mention of him down, calling him greedy and insatiable. He has been around since the beginning of it all, and it is time for him to go and rest, they would say, with a strong mix of indignation.   Others talk about zoning and why he must not destabilize the smooth rotation of power which has been the signature of Enugu politics.

Intellectuals, most of whom I have been with, appear to favor Ike. We have tried, without much to show for it, a government that is at our own level. It is time, they think, a high-toned and sophisticated individual is given a chance. Those here are doubtless students of the wider world of politics and know how unimportant such trivialities like zoning and long stay in power are in progressive, goal-getting, serious-minded societies. They don’t care if Ike had been in power since he was an infant or hails from the wrong zone. They want somebody, who, in Biden’s trademarked phraseology, would build back better for the Enugu people. By opinion polls, this thinking is mainstream and prevalent even among the common run of Enugu people. The general agreement seems to be that a midwife is needed to deliver us from the present. Nobody is happy that Enugu is no longer the green and beautiful city it used to be. That she has, lamentably fallen into gross and grotesque disrepair.

The current situation of the state is Ike’s strongest card. He may not be a good man but leaders have been elected because the people are desperate and want to end the status quo. It is exactly the same kind of situation that led Nigerians into bringing in the All Progressives Congress. And some years later, they feel like they sold a monkey to buy a dog but the deed is done. There is such a chance in Enugu state today. The ground is fertile for populism, angry and seemingly patriotic rhetoric. A man who shouts; “let us make Enugu great again”, will have a large audience. But it is doubtful if Ike will be up to this task.

As certain as the sun would set tomorrow, the current governor is not going to anoint Ike.  The most likely thing to happen is that after the governor’s favorite is known, Ike would decamp to another party to give him a run for his money. He could also wait till after the primary election of the People’s Democratic Party before deciding on how to shape his opposition.

We are empirically sure of certain things: Ike has a heavy financial war chest. He is an old fox and the PDP cannot rig his election, like they had egregiously done in the past. This is, if the new Electoral Act did not invent new difficulties for election riggers. Ike would know how to use the instrumentality of the judiciary as well. This will be, perhaps arguably, the most formidable opposition politics we would be witnessing since the state was founded. Those who are taking him lightly are doing so at their own peril.

There have been a lot of brazenly arrogant, imperial words from the usual reactionary quarters–whoever the governor anoints– in the manner of Elijah handing his girdle over to Elisha– becomes the next governor of Enugu State, so it is thundered–superciliously. That is the most natural thing to say and those holding this opinion are not mistaken. If one must be fair, they have looked at recent history and are accordingly guided. Since the return of democracy, as it is fashionable to say, that has been the traditional, unbroken pattern. Every governor had picked their successor.

But if they cast their eyes on broader and older history, they would have noted the dynamism that is natural to politics and the evolution of every human society. You might chide me for being irresponsibly idealistic, but my social and political learnings do not permit me to believe that Enugu shall forever remain politically somnambulistic and recumbent.  The ruling party must not ignore the undercurrent, sweeping palpably. Empires collapsed throughout the ages when the players became relaxed, while entertained by the thought of their own invincibility.  Populism might just work this time.

Okike Ezugwu is an Enugu-based lawyer and freelance journalist