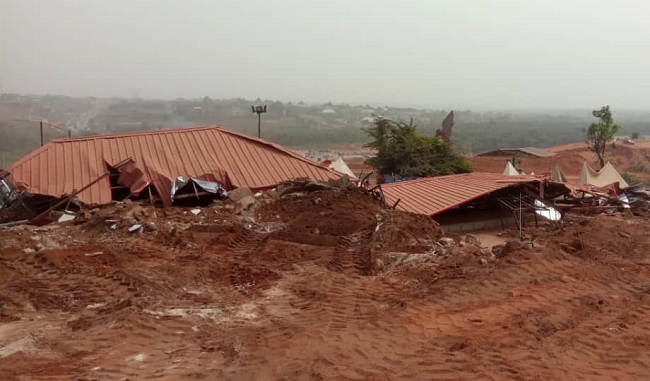 He alleged that the traditional ruler of the community is the brain behind the constant invasions of his church by some youths who, according to him, claim that the church’s land now belongs to the community.

The cleric lamented that the invasions had led to the assault, battering and molestation of worshippers and workers, claiming that the church has lost over N20m to the damage.

Sources close to the cleric said issues started when youths of the community were said to have invaded the church with a bulldozer, demolished the church building and destroyed other valuables following unresolved land dispute between both parties.

They also said the invasions have persisted despite various peaceful resolutions, which included the setting up of a peace panel by the Archbishop of Onitsha Catholic Church Metropolitan Archdiocese, Archbishop Valerian Okeke.

Speaking in an interview at the site of the demolished church building, the Spiritual Director of Olu Ndi Enigwe Adoration Ministry, Rev. Fr. Jude Uche Olundienigwe, said the property, which was originally 23 plots of land, were fully negotiated and purchased from Umuopi family, the original owners of the land.

He also claimed that the Federal Government had utilized about 10 plots of the land for the construction of the second Niger bridge road, leaving behind about 13 plots for the Ministry.

Narrating the invasion of the church last week, the cleric said: “The youth came with a bulldozer and as they were demolishing our church and sacred images, I put a call across to the monarch, Igwe Chidubem Iweka of Obosi, several times to ascertain whether he was the person who issued the order, as the youth claimed, but he refused to take the call.

“We put a call to the President General of Obosi community, Sir Ikechukwu Okolo, who said he could not intervene or stop the Obosi youths until he hears from Igwe Obosi. The boys had a field day threatening to shoot me if I showed up. They razed down the whole worship centre.

“The documents of the 23 plots of land purchased from Umuopi family, Obosi, are with us. In 2019, the Federal Government decided to construct a road leading to the second Niger bridge through the land, which we obliged. The Archbishop of Onitsha Catholic Diocese, Most Rev. Dr. Valerian Okeke, advised us to temporarily vacate the place to enable the construction company to do their job after which they utilized about 10 plots out of the property.

“Since we returned to reconstruct and continue our normal worship in our property, it has been trouble. The youths of Umuopi family came destroying church structures, saying that the government compensated us, so we do not have any land left. We said no, the government only compensated us for the much it used, we still have about 13 plots left. Many times they came and beat up worshippers and artisans reconstructing the place and confiscated their work tools.

“We have been trying to make peace. After about three invasions and extortions last year, we approached the President-General of the community, who tried to mediate between the church and Umuopi family.

“The PG asked them to go and verify whether we encroached into another person’s land, they said no. This fourth negotiation, which ended with another compensation of one million Naira was documented as a MOU and signed by witnesses, including the PG stating that we should not be harassed again but we were surprised at this latest development and demolition.

“Although the church property and structures demolished were worth over N20m, the damage incurred by the demolition of the sacred images and altar of worship on the souls of worshippers was unquantifiable. The damage is not just monetary. It killed many souls of worshippers, destroying their faith. No amount one will pay materially will be enough to pay for the damages. I call on them to repent.”

However, when contacted, the community monarch, Igwe Chidubem Iweka, denied sending any group of armed youths to demolish the worship centre.

Similarly, the President-General of Obosi community, Sir Ikechukwu Okolo, in his reaction, claimed that Rev. Fr. Olundienigwe was the architect of his own misfortune, saying that all his efforts as the community leader to mediate between the adoration Ministry and Obosi indigenes were frustrated by the cleric.

According to the PG, “I did not receive any invitation from the Archbishop for any peace talk, rather Fr. Olundienigwe at a point said he had lost confidence in the palace and refused the invitation from Eze Obosi for further dialogue.

“The Igwe could not have sent people to demolish a worship centre as claimed by the church. I found out that Fr. Olundienigwe acquired property and built structures blocking other property owners around that area from having access roads to their lands. So, the original landowners, the youths, simply went to recover access roads encroached by the ministry.”

IPOB promises not to boycott 2023 polls