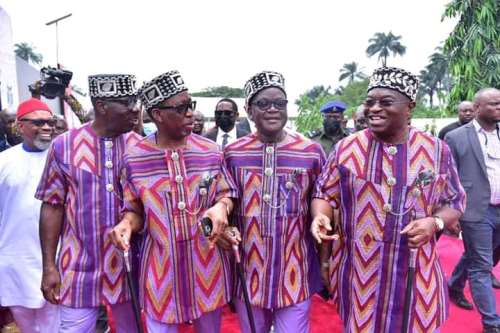 In his quest to promote locally-made products, Gov. Okezie Ikpeazu of Abia State, Wednesday, decorated his fellow Peoples Democratic Party, PDP, governors who came to the state for their meeting, with locally-made Akwete fabric.
The PDP governors were hosted in the ambience of Ikpeazu’s palacial residence at Umuobiakwa in Obingwa Local Government Area.
Ikpeazu right from the inception of his administration, has been an advocate and Chief promoter of home-made products.
Since he came on board in 2015, he has never won foreign shoes and suits but  patronizes Made-in- Aba foot-wears and suits which he has equally turned into a brand.
Ikpeazu has also himself undergone training on shoe making even as governor all in his bid to promote locally-made products.
The newly-inaugurated Governor of Anambra State,  Professor Chukwuma  Soludo, has also said his administration would patronize and promote locally made products.
All the PDP governors present at the meeting were looking splendid as they emerged from the hall wearing neatly-woven Akwaete clothes.
Ikpeazu may not have performed excellently in all the sectors but even his opponents agree that he has been exceptional in the promotion of made-in-Abia products.
Can other Governors in the South East emulate the patriotic spirit and pace of Ikpeazu and Soludo?