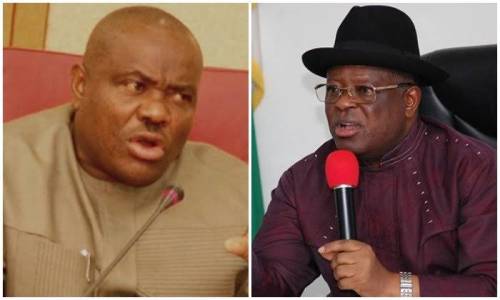 The cold war between Governor David Umahi of Ebonyi State, and his Rivers State counterpart, Nyesom Wike, got messier Thursday, as Umahi accused Wike of masterminding his current ordeals.

Umahi who claimed Wike instigated the court action that led to his sack challenged the Riversn State Governor to public debate.

The Ebonyi Governor who made the allegation while fielding questions from State House Correspondents in Abuja, claimed that at 25 he was already a billionaire.

He accused Wike of behaving like ‘Governor-General’ and asked him to concentrate on the governance of Rivers State and stop meddling into the affairs of other states.

Umahi expressed rage over Wike’s outburst and remarks against him during a recent television interview and warned him to tread with caution.

He accused Wike of corruptly enriching himself with public funds belonging to Rivers State.

“You heard him on Channels boasting that he is the main man! That depends on the breath of God, I pity illiteracy. It’s a shame.

“Otherwise, who were you? I was a billionaire at the age of 25. And I have worked all my life. I have asked him to come for a public debate.

“If he says he has done well, he is Mr. this or that, let him come for debate. Let’s start with our childhood. I’m not disturbed.

Umahi said Wike had pocketed Rivers State but reminded him that he should be ready to give account of his stewardship.