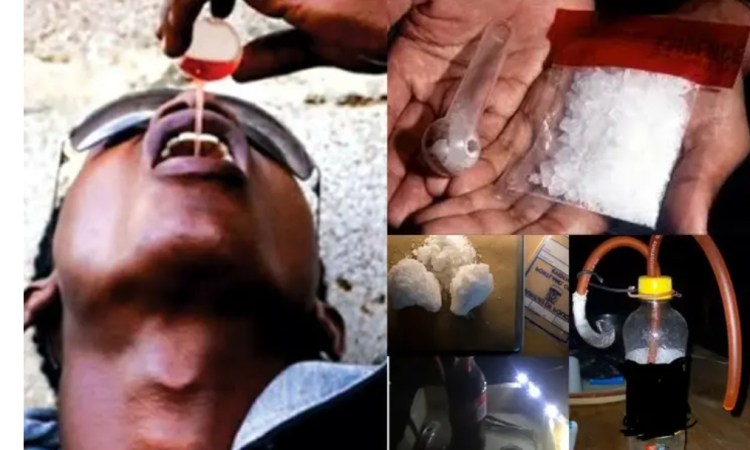 The former Chairman, Council of Traditional Rulers, Umuahia North Local Government Area, and the traditional ruler of Oriendu Autonomous Community, HRM Eze Philip Ajomiwe, has decried the devastating effects of methamphetamine popularly known as ‘mkpurumiri’ in Igbo, and other hard drugs among youths.

He told Ikengaonline that the vigilante groups in Ohuhu land have been placed on red alert over “mkpurumiri”, which is a new but worrisome development.

The monarch said he would convene a palace meeting to sensitise his cabinet members on the dangers posed by the consumption of mkpurumiri so that a united action could be taken to curb the menace.

He, however, accused the police of frustrating the war against hard drug consumption in rural communities. According to the monarch and famous cassava farmer, compromise by the police when information on the hideouts of drug peddlers is volunteered to them sabotage communal efforts in the drug war.

Eze Ajomiwe, however, disclosed that his community had settled for what he called ‘plan B’ in dealing with hard drug menace following police compromise.

” When we alert the police about these bad boys that take hard drugs in the communities, the police don’t help matters. They compromise. But we have decided on another plan to achieve results.”

The monarch advocated adequate Government funding to traditional rulers to enable them effectively combat crime in their domains.

” Even when you invite the police, you need to fuel their vehicle. That’s why Government should adequately fund traditional rulers to enable them fight crime effectively.

Continuing, he said: “The state should also mount vigorous campaign against this menace which is a new development so that our youths will not ruin their future with “mkpurumiri”.

In his contribution, a renowned Aba-based cleric and former District Superintendent of the Assemblies of God, Aba North District, the Rev. P. K Emeaba, blamed addiction to hard drugs on lack of focus and proper mentorship of the youths.

He noted that if the proper orientation and objectives of life were inculcated in the youths early enough, they would not have room for distractions by hard drugs and other harmful lifestyles.

The cleric challenged parents and religious leaders to lay the right foundation and feed the youths with the right messages that would help place them on the right track for a focused life.

He insisted that a youth who is loaded with “the pure, unadulterated word of God and the right orientation on his mission on earth” would not have any space left for mkpurumiri.

“Anyone who lacks proper upbringing and guidance will miss direction in life”, he said, adding that “my members can’t go for anyhow job because of what I have taught them”.

” We need to identify their hideouts in the rural areas including school buildings and uncomplicated structures, then devise strategy to ensure the perpetrators are arrested and punished”.

The NMA boss who blamed the menace on the increasing rate of youth unemployment, challenged Government to genuinely address the challenge of unemployment.

Arguing that when youths are meaningfully engaged, they would not have time for deviant lifestyles, Dr. Okwuonu said Government and the political elite should meaningfully empower youths and stop giving out stipends in the name of youth empowerment.

“Vocation is important. What our politicians do in the name of empowerment is mockery. They do that for media hype but what the youths need is real empowerment that will meaningfully engage them.

“If they are assisted to acquire the right vocation and established, they won’t have time for hard drugs.

“Youths go into hard drugs as a result of depression due to economic hardship. I have a lot of applications on my table – graduates but there is no job anywhere. I think that if these youths are encouraged to acquire vocations and assisted to establish themselves, they can stand on their own and help engage others.

” If you visit various car wash points, you will marvel at all sorts of things that our youths consume. It’s not just mkpurumiri, there are other substances they mix and consume which do a lot of damages to their organs.

” They feel those things they sip give them energy, but it is gradually eating them up. That’s why youths develop kidney stones, heart diseases, and even strokes.”

Dr. Okwuonu advocated aggressive campaign and sensitisation against the harmful effects of methamphetamine and other harmful drugs to save the future of our youths.

He also urged state houses of assembly to legislate against the harmful drug so that the distributors and consumers could be punished as a deterrent to others.