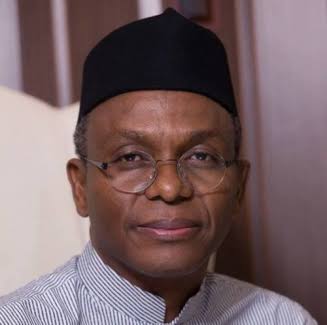 Governor Nasir El-Rufai, of Kaduna State, Wednesday, blasted the Nigerian military for failing to prevent the attack by terrorists on Abuja-Kaduna bound passenger train on Monday that claimed the lives of no fewer than eight out of the 970 passengers on board while scores of others were wounded and abducted by the terrorists.

El-Rufai, who said he was “frustrated and helpless”, alleged that the military knew the location of the bandits behind genocidal attacks in parts of the state but for reasons only known to it, had refused to bomb their hideouts.

The aggrieved governor queried the reluctance of the military to deploy the newly-acquired Super Tucano aircraft against the bandits despite having been designated terrorists by the court.

Ikengaonline recalls that the Attorney-General of the Federation, Abubakar Malami, had on November 25, 2021 obtained a judgment designating all gunmen in the North-West as terrorists.

This was said to be a condition by the United States Government for the deployment of the aircraft outside of the North-East.

Despite obtaining the necessary legal backing, the Super Tucano had not yet been deployed in the North-West according to media reports.

Addressing journalists on Wednesday when the Minister of Transportation, Rotimi Amaechi, visited the state to assess the situation following a terrorist attack on a Abuja-Kaduna train, El-Rufai insisted that the terrorists’ hideouts should be bombed.

According to the former Minister of the Federal Capital Territory, FCT, locations of the terrorists are a public knowledge.

The visibly livid governor wondered why the security agencies were not hard on the terrorists wreaking havocs across the state.

His words: “We have enough intelligence for us to take action. The Air Force undertakes enough ISR (Intelligence, Surveillance and Reconnaissance); and the DSS has informants all over the place.

“We know what they (terrorists) are planning. We get the reports. The problem is for the agencies to take action. Don’t wait until they attack before you respond. The Army should go after their enclaves to wipe them out. Let the Air Force bomb them.

“Before, they were categorised as bandits and if you bombed them, you would have issues with human rights organisations and international criminal courts and so on.

“But, now that they have been declared terrorists by the court, they can be legally killed without any consequences from international human rights organisations.”

El-Rufai who said Kaduna State was currently in a state of war, insisted that the camps and phone numbers of the terrorists were known by security agencies.

“We know where their camps are, we know where they are; the SSS have their phone numbers, they listen to them, and they give me the report. We know what they are planning. We shouldn’t be waiting for them to attack; why can’t we go after them?”, El-Rufai asked.

Gov. El-Rufai said he would not mind if few innocent citizens lose their lives in the process of smoking out the bandits.

“We are in a state of war; this place should be declared a war zone. The Army, Air Force, and the Police should go in there and kill them. Will there be innocent casualties? Yes! In every war situation, there are casualties.”

He said train operations should stop by 4:00pm for security reasons.

“We have written to the Nigerian Railway Corporation twice to stop the evening service. The last train from Kaduna to Abuja should leave by 4pm so that it will get to Abuja in daylight.

Meanwhile, the Minister of Transportation, Chibuike Amaechi, has hinted that the Nigerian Air Force would start escorting trains to avoid attacks by terrorists.

Amaechi also added that repair works on the bombed rail track would commence immediately as efforts were now on to install security sensors on the tracks.

He urged passengers not to be scared of boarding trains, assuring that Government would beef up security around rail tracks.

“I will speak with the President. He is already giving directives. I’m sure by the time we finish the repair of the rail tracks, we would have got approval for the security equipment and we would possibly have installed it.

“But even if it hasn’t been installed yet, we have spoken with the management of the Nigerian Air Force to escort the trains. They were previously escorting the trains, but recently the weather has been very bad and visibility dropped to below 500 metres, so they couldn’t fly.

“So, they’ve not been flying and this is why this (the attack) was successful. They have resumed flying and will escort the trains when we resume.

“We intend to employ villagers on the corridor so that they can report any suspicious movement to us and the security agencies,” Amaechi stated.

On the passengers and other persons on the ill-fated train, who are still missing, Amaechi said efforts were being intensified to trace their whereabouts.

Be that as it may, the House of Representatives has expressed fury over the failure of the invited ministers of relevant ministries, as well as the leaders of the security and intelligence community to appear before a panel investigating the Kaduna incident.

They however, sent in their representatives except the NAMA boss, who appeared in person.

“So, we cannot proceed. And I am saying with a heavy heart that no matter the assignment that our generals are handling, I believe the parliament deserves a listening ear. This is the House of the people. I am saddened; I am not happy. I am expressing my disappointment”, Rep. Wase declared.

Meanwhile, the pan-northern socio-political organisation, the Arewa Consultative Forum, has lamented the Kaduna attacks, saying that the North is now under siege.

Secretary-General, ACF, Murtala Aliyu, said the organisation was “tired of crying out on the issue of security and other challenges in the northern part of the country.”

“It regrets that all efforts claimed by security agencies and governments at various levels have been unable to put an end to such banditry and terrorism”, ACF said in the statement.

Kaduna State is increasingly becoming very unsafe following incessant attacks by bandits who have been killing scores of residents and destroying property worth billions of Naira.