By EditorApril 4, 2022No Comments3 Mins Read 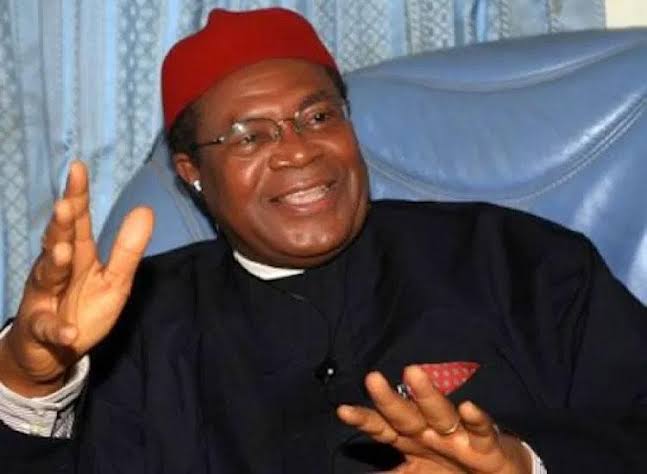 Former governor of the old Anambra State, Chief Okwesilieze Nwodo, has declared support for Nike clan to produce the Governor of Enugu State in 2023.

Nwodo disclosed this when members of Nike Patriotic Front, a cultural/socio-political pressure group in Enugu East Local Government Area of the state paid an advocacy visit on him.

The former National Chairman, Peoples Democratic Party (PDP), also appealed to politicians in the state to respect the subsisting zoning arrangement of the governorship position in the state.

He said that his position was in the interest of justice, equity and fairness.

The former governor said that by the zoning agreement in the state, it was just and fair for Enugu East Senatorial District to produce the next governor in 2023.

The PDP chieftain identified Enugu East and Isiuzo as the two LGAs in the zone that needed to be considered for the governorship slot.

Nwodo said that the two LGAs had not had commensurate political positions and appointments unlike the rest of the councils in the zone.

Responding to the request to support a Governor of Nike extraction in 2023, Nwodo said: “I empathize with your case and want to associate myself with your demand. What you said is self-evident and not rocket-science.

“The statistics is there. How I wish the rest of Enugu would have sympathy on you.

“To be honest, it is true that over 80 per cent of your land has been taken and my feeling is that professionals like you should put pressure on government to get some kind of compensation.

Nwodo appealed to political stakeholders in the state to cede the governorship position to the areas that had not occupied the seat in the interest of justice and equity.

Earlier, the leader of the delegation, Dr. Sam Ngwu, said that the advocacy was aimed at appealing to the conscience of political leaders in the state to cede the governorship position to Nike clan.

Ngwu said the clan had made enormous contributions in the development of the state to the point of sacrificing their most important and choicest resources.

He said that over 90 per cent of their land had gone into the development of the state with nothing to show for it.

“Those plots of land are our children’s inheritance but we gave them out for the development of the state. We no longer have farmland as everything has been taken by government.

“It is not good to allow others to define the Nike man as a land seller or speculator when we have people who have earned credibility in different professions.

“That is why Nike Patriotic Front has come to sensitize our people both culturally, politically and civilly,” he said.

He said that justice, fairness and equity favoured Nike clan to produce the successor of the incumbent governor.

“We are not greedy but obedient. Equity, fairness and justice favour Nike clan to produce the next governor because we are the landlords in Enugu and elder to Nkanu and Isiuzo,” he said.

Ngwu said that the group had no particular candidate in mind, adding that it could be anyone.

“All we are saying is that let it be a Nike man. We have professionals and intellectuals that can better advise such person to lead well,” Ngwu said.