Emulate Okpara, Mbakwe, they ‘re products of god-fatherism like you, ally tells Ikpeazu 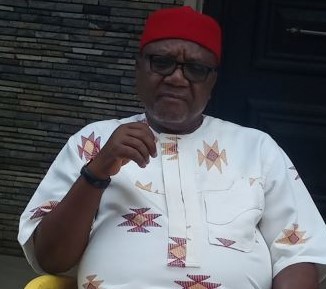 Ogbonnaya who said this in an interview with Ikengaonline, expressed disappointment that Ikpeazu, failed to post the needed achievements that could enable the ruling Peoples Democratic Party, PDP, easily win election in 2023.

He said that although he was instrumental to Ikpeazu’s emergence, he should not be blamed for the Governor’s underperformance.

“Some people are against god-fatherism in politics but as a people we believe in mentorship, and that is what some call god-fatherism. Let me go back to the 60s, late Dr. Michael Okpara, the former Premier of Eastern region was never a politician but a medical doctor. But when he stood against the White men in Enugu after the infamous shooting of coal miners, the elders of Eastern Nigeria called him and registered him in the NCNC to contest elections. Did he mess up because he was brought by godfathers? Today everybody is celebrating his legendary achievements which is yet to be rivalled since then by anybody not even remembers those god-fathers that made him.

“The same thing happened with Dee Sam Mbakwe when he challenged the abandoned property saga. He took the Government of Rivers State to court, and the Igbo of Imo State decided to field him for the Governorship of Imo State. Did he not do well? Were there no god-fathers that brought him into politics? He was just a poor lawyer before god-fathers brought him to the limelight.

“So, I cannot take blames for Ikpeazu’s underperformance simply because I played key role in his coming on board. How can I take the blame?”

He further accused Governor Ikpeazu of not heeding wise counsel, hijacking PDP and sidelining the elders of the party.

“I have been talking to the Governor inside. But the only problem I have with him is that he appointed advisers who he is advising, and not the ones that can advise him. So, nobody advises him. Even when you talk to him inside, Okezie believes in elders. That is why he has been avoiding the elders. He doesn’t want to sit down with elders to discuss.

“Abia PDP is not Ikpeazu’s property. We all have equal stakes in it. I’m a co-founder of PDP in Abia. So, Ikpeazu cannot claim ownership of Abia PDP. If Senator T. A. Orji had destroyed PDP when he was Governor how would Ikpeazu be Governor today? I beg him to please save PDP from total collapse in Abia. If we lose Abia in 2023 election, it will take us 20 years to recover it from the opposition.”

The chieftain of the ruling Peoples Democratic Party, PDP challenged Ikpeazu to explain why Council workers in the state receive half salary while pensioners are owed arrears of many years.

Ogbonnaya said that while he held sway as Commissioner for Local Government and Chieftaincy Affairs, Council workers and pensioners were never owed despite lower allocations he received.

“How come now that they are receiving N2 billion monthly that they are not paying salaries, they can’t pay pension? Why are they paying half salary?  I challenge them to make public what the LGAs are receiving as monthly allocation. I have so many other things to ask them. Let them prove me wrong.

“If they say I lied, can they publish all the monies that accrued to this Government in the past seven years? Let them tell us because we have the right to know.”

He said the foundation of Abia would shake if he were made to make further revelations of what he knew about Ikpeazu’s Government.

“I have segmented what I want to say into three. In one of them I have A, B, and C. I have just opened C part of it. I’m still holding B, and A. Once I open my mouth in the second segment to say what is in it, it will shake the foundation of Abia State.”

Ogbonnaya who claimed he brought Ikpeazu to those that made him Governor in 2015, expressed disappointment that the Governor had performed abysmally.

“What I’m saying is that for a party that wants to win election, it must have something on ground to tell people. It must have evidence of performance to campaign with!

“I’m saying emphatically that this Government has not performed. They are going to find it difficult to win election in 2023. And I’m calling on the elders of the party to wade into what is happening in Abia. I have looked at the problem we have in PDP, and I know we are heading for a crash. That’s the plain truth. Anybody with a spiritual eye will see it.

“Beginning from the faulty zoning arrangement of the party to unilateral nomination of somebody, everything is wrong with the process. The Governor himself hand-picked somebody and he is trying to foist him on the rest of us.”

He urged PDP delegates not to succumb to any financial inducement but vote according to their conscience.

“I’m here today to tell PDP delegates that the ball is in their court. Let’s replicate what happened in Ebonyi State in 2015. The Gov. Martins Elechi wanted to impose his stooge on the people of Ebonyi State, but the delegates said no. They revolted and voted the Deputy Governor, David Umahi, who is now the Governor of that state. Go to Ebonyi today and see the wonders by Gov. Umahi – how he has transformed Ebonyi such that Ebonyi has long overtaken Abia that is its elder.

Chief Ogbonnaya said he preferred to reject Ikpeazu’s gifts instead of receiving them and close his eyes against his excesses.

“Okezie is my friend and I still believe that he is my friend even though he doesn’t like criticism. We have been privately discussing the affairs of Government but because he decided not to listen, that is why I’m now talking publicly. There is nothing I want that Okezie does not give me. But I have said no to his gifts. I don’t want them again. I prefer to be enemy of Okezie and be loved by Abians and save PDP. Somebody has to talk and that is why I am talking.”

Ogbonnaya insisting on power shift to Abia North in 2023, said there was an agreement both in 2015, and 2019 respectively that after Ikpeazu’s second tenure, power should rotate back to Abia-North in the spirit of equity and justice.

He said Ngwa elders delegated by the Governor were part of the agreement which made Professor Greg Ibe from Abia North to step down for Ikpeazu in 2019, wondering why the agreement will not be honoured.

“It was a gentleman’s agreement. The agreement was that Abia-North will hold power for eight years, Abia-Central the same thing, so, it would be wrong not to allow Abia-South to complete its own eight years in office. And that was why Professor Greg Ibe dropped his governorship ambition in 2019. So, why are they not abiding by that agreement now?